Full scoop and photos to come.
some background reading here
Posted by Eric at 11:40 PM No comments:

Feverishly - that would describe things best right now. Cranking out gear for racers all week non-stop. Finally I took a break last night to work on my own stuff. I'm heading out of town this weekend to one of the colder mountain places I can think of. So I made some progress on my gear for that:

First I went to town on my climbing pack. I was never happy with it after I made it with haste last April. So after an extensive session with the seam ripper I added VX gussets to the back with sleeping pad loops then a collapsible crampon pouch on the center panel. From there I made a new extension and main closure. The difference is amazing. Its a totally different pack!
Before: 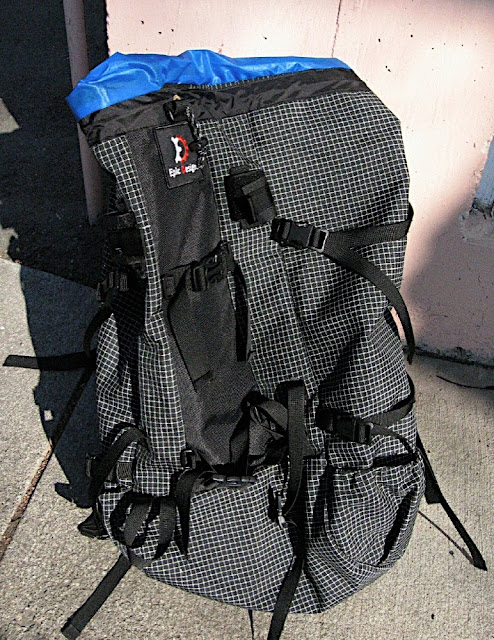 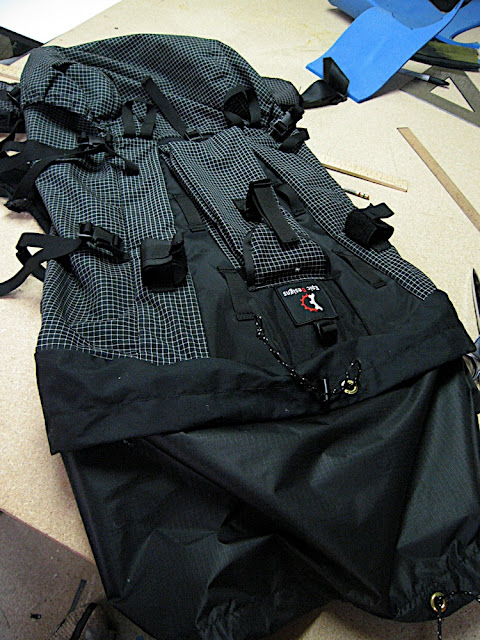 I also found out my overboots fit on my ski boots.. and fit in both my splitboard bindings.. 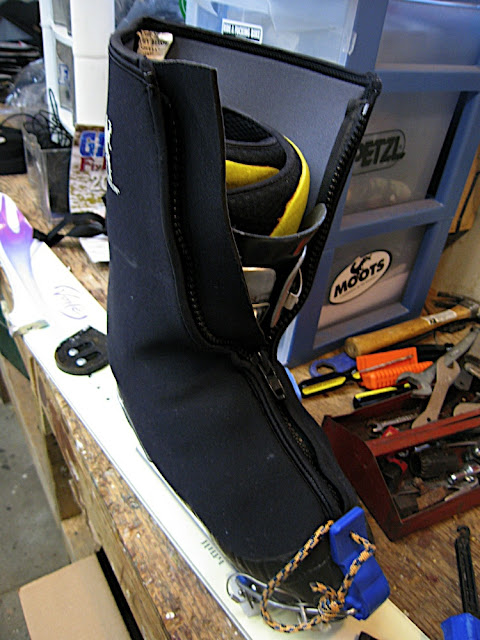 and my mountaineering skis. 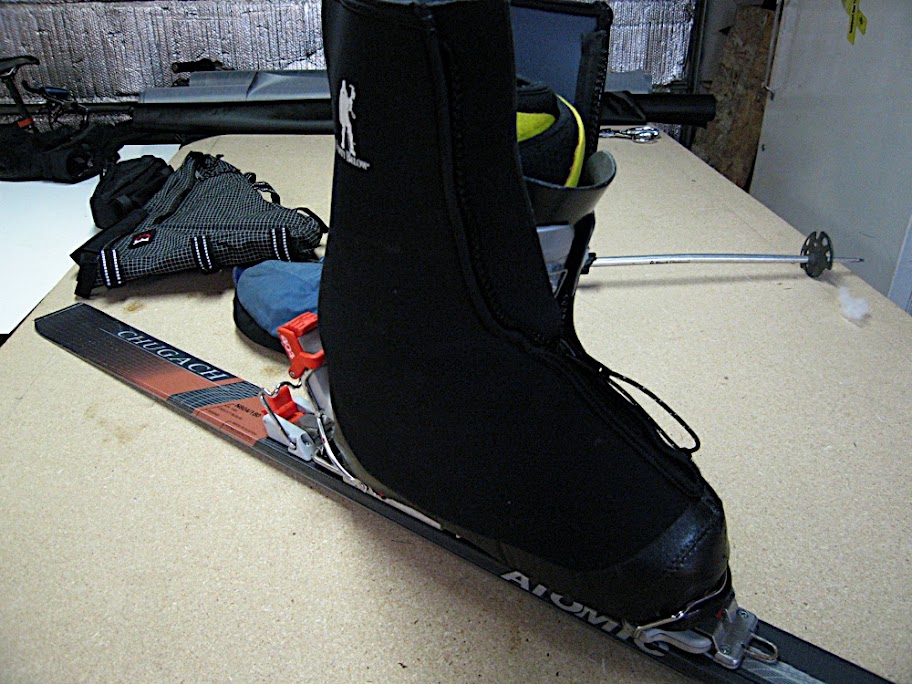 the down booties were looking pretty lame at their 10 year birthday, so I ripped open the back and stuffed them full of primaloft chunks.
before: 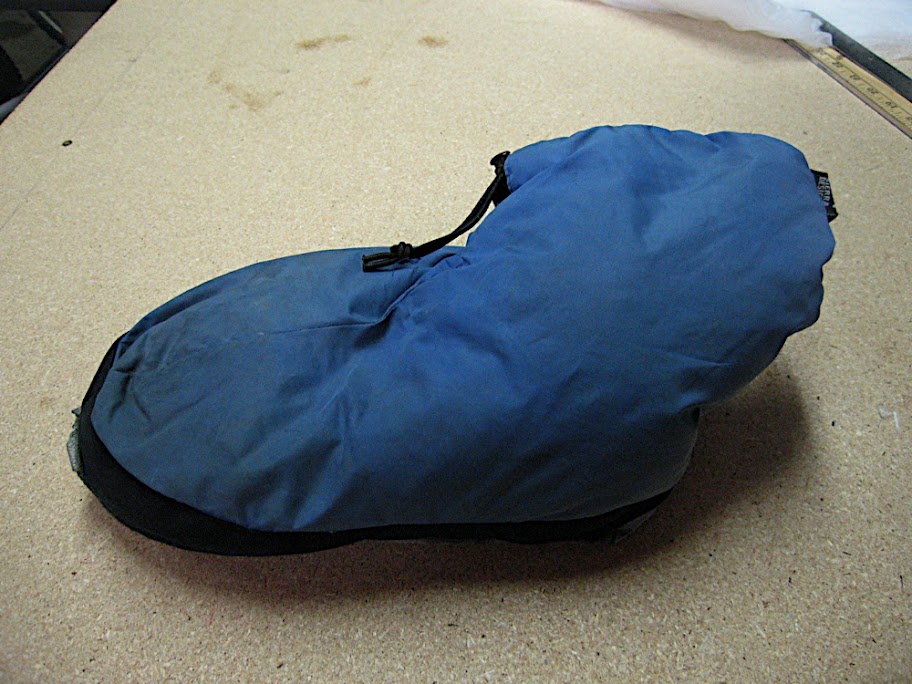 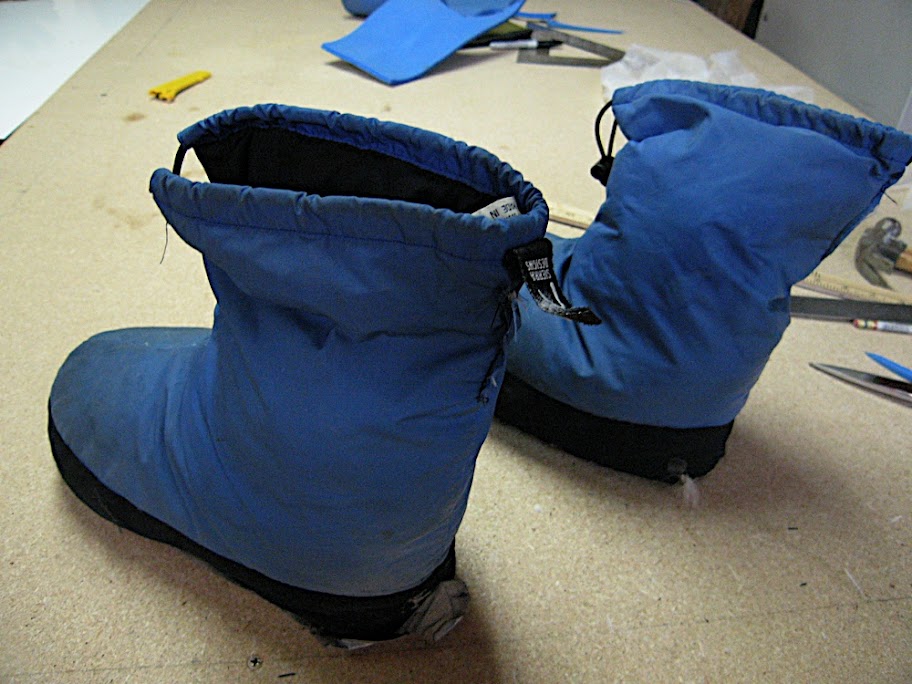 
Carl Battreall is filming a documentary on the evolution of the fat tire bike. He's really trying to get to the root of all this madness and get lots of good shots in a creative way. He paid me a visit earlier this week and he got some sweet macro sewing shots.. after that he tried to get me drunk and talk on tape with mixed results..

The end result should be great, he's aiming for the film fests (banff etc.).
Posted by Eric at 8:24 PM 2 comments:

This sucks, its 49 degrees outside - over a 60 degree temperature swing from a week ago.

Good bye wonderful snow.. you will be missed.
Posted by Eric at 12:58 PM 3 comments:

Sleep in, make pancakes, go for a walk.. the usual.

Dan went for a bike ride, he's getting better at the sub zero winter biking thing, he even made himself a nose protector out of scrap fleece today, looked like it worked...

Late afternoon - early evening ride up the trails. Looking at the NWS website showed a big temperature inversion in the hills. What was zero degrees in town was 20-25 degrees up at Glen Alps, downright tropical after a week of -15 and below! in the truck we went for some warmer air.

A Cyclops Alien biker? or a prototype "facelamp"?

Played around with some time exposures on the way down... Came home to this critter in the back yard, that's my bedroom window in the back. Looking out it as I write this he still has not moved. I might give him a name if he decides to stick around.. any suggestions? He's a big boy.

wild animals and a pink house yep.. just another Sunday.
Posted by Eric at 12:21 AM 5 comments:

Seems to be the thing to do with these outdoorsy type blogs is to do an end of year re-cap. 2008 simply rocked, it was my best year in Alaska and somehow managed to pull off allot of adventures while being newly self employed, so here we go:

January - Made the career change from being a Civil Engineer to sewing bike gear in my basement. The change in income was quite noticeable... Continued recovering from knee surgery I had in November.

February - Lots of swimming, lots of sewing and designing gear for the winter races and other things:

Erin and Hig came through town and we tried crossing Knik arm in packrafts at ten below... did not get too far but had quite an urban adventure trying.

Mom came and visited for a week - we had a blast together!

March - Learned that the knee was healing and big days were once again possible. Back to Turnagin Pass and the re-union of the Swallowtail:

April - Talkeetna Glacier trip with Bryce, Billy and Yvonne. We basically climbed and skied our butts off for 6 days, then sat in the tent storm bound and glacier skiing in whiteouts for another 4. Awesome trip!

May - Eagle River big mountain Slaying - Korohusk, Eagle peak, Flute, Calliope. Either by myself or with good friends who kick good steps.

June - The silly season us upon us. Dylan, Kellie and went mountain biking in Denali with packrafts for 4 days with 2 days of food. whoops...

Met up with Erin and Hig in Unimak Island and learned the true meaning of the word "Oppression". Starvation training at its finest.

July - Kenai Coast nature fun biking with Dylan and a visit with family for my grandmother's passing.


Lost Coast Trailer from Eric Parsons on Vimeo.
We pretty much laughed, ate cookie dough, kept moving and pulled it off. Fantastic trip!

September - Rebound from the summer and get back to sewing. Not much else.

December - End of the year, having a real winter in town, skate skiing was off the charts good everywhere.

For the past week or more its been nice and crisp with temps not getting much higher than -10 and frequently dipping to -25 in some parts of town and on the trails. The biking has been great with all the trails totally bomber.

Threw a front rack on pugs for easier loading. Been riding with extra weight on the bike just because.

Today though my XT freewheel finally died, after a summer of saltwater imersion and now - 15something temps it just quit engaging. The problem was that I left my allen wrenches in the truck so I couldn't move the brake caliper and do the wheel swap to singlespeed. Oh well, the skateboard/ scooter technique worked to get back and it was mostly downhill.

But anyway.. Did I mention the trails are in Great shape? Just as good and fast as summer.