Still in La Paz. Had a great time last week I biked ¨the most dangerous road¨ To Coroico, which is on the other side of the mountains on the fringe of the jungle. Absolutely beautiful area. The first time I took the wrong road, long story but ended up descending 13,500´ ! to the river and had to make my way back up. But the next day got a lift back up to the intersection I missed and did the ¨right¨ road! Today was awesome, I met up with the owner and guides of Gravity Assisted Mtn biking. and had a day of full on Downhill riding, I was using one of their bikes, a Kona stab Deluxe, a $3000 bike with over 7 ¨of front and rear suspension.

So basically I did stuff today that I´ve never even come close to doing before. BIG jumps and drop offs. Pretty much riding off cliffs and rediculously steep terrain. it was awesome! I caught on pretty quick to how to handle the bike, since it feels more like a motorcycle. There were about 10 of us, and we did three shuttle runs at an area south of the city, then a few of us did an urban assualt run from the top of El Alto back down to the city. That bike is incredible, I could just launch off a big drop and let the suspension do its job. Very addicting! similar feeling to going really steep and fast on my snowboard but different too. ANyway I´ll probably be here another day or two before heading south. This area is awesome, its the biggest city I´ve been too where there is so much cool stuff to do within an hour drive. 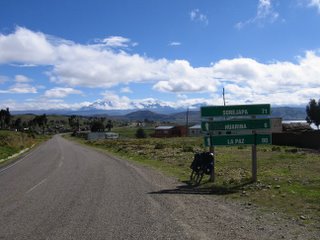 I just arrived in the city of La Paz about two hours ago. It was an AMAZING entrance! La PAZ is in a high valley and you descend from 13,000´ to 11,700´into the city on this highway. It was awesome. I spent the last two days biking from Copacabana. Yesterday had some climbs and pretty wet cold weather and hail, but the views around Lake Titicaca were amazing. I took a barge across a gap where there is no bridge yesterday which was fun. Last night I ended up in a fishing village Huatajata. Its a really special area because a while ago I read Thor Heyerdahl´s book on his Ra expeditions using reed boats to cross the Atlantic. Anyway, this area is pretty much the focal point of Ayraman indian knowledge on the art of reed boat building.

The Hostal I stayed at was the house of one of the Catari brothers who has helped build some incredible boats for many expeditions. amazing man, he showed me his museum of reed boats, miniatures about 2-3 ft in size of all the actual boats that have done big trips. It was really cool, I bought a tiny 1.5¨ boat from him for under a dollar (my first sivouiner!) so now I have a piece from a master 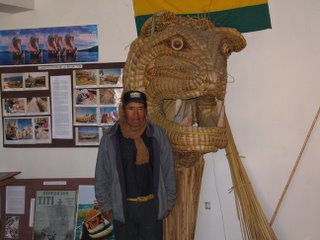 ...anyway the ride today was good, leaving the lakes behind and riding along the Altiplano with good views,and headwinds. My knee felt pretty darn good, so we´ll see what comes next. after about 40 miles, the signs of urban sprawl could be seen as I entered the trashy parts of El Alto, then ended up on this brige and started the descent to the city on the highway, it was awesome!

So I´ve hooked up with the people that run Gravity Assisted Biking, they run downhill mtb bike trips here and are the best mtb bike tour company in bolivia, super cool bunch. I met one of their new guides for the summer in copacabana, then their manager dude onthe barge. Their season is just starting. So i´m hoping to go on a ride or two with them (using real bikes..)all for now, not sure what my plans are next. Thinking of doing a ride to Arica on the Chilean coast then bussing back to La Paz. would probably take a week or so.
take care
Eric 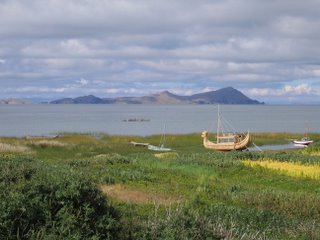 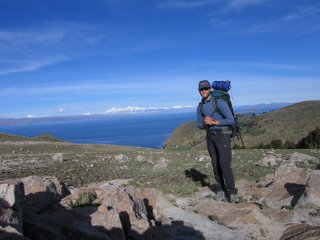 I just got back to Copacabana after an excellent trip to Isla del sol. Its a strange cloudy day here, perfect to relax and rest. I ended up biking 12 miles out to this village at the end of the peninsula closest to the island. From there I hired an old man (78 !) with a row boat to paddle me across to the island, I stored my bike with his son. Isla del sol is one of those very special places, its surreal. The first afternoon I hiked along the ridge of the island to its northern part and camped nice and high to an amazing sunset with views of the Cordillera real the other way. Then at 9:30 I woke up because it was so bright from the almost full moon! unreal... 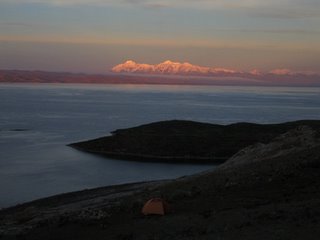 I spent the next day wondering around the northern part of the island, visited a small village and finally ended up finding my own little secluded beach where I baked in the sun for the rest of the afternoon. Yesterday put in alot of walking! hiked over to the west side and followed the ridge allthe way to the little light house on the end.. I was sitting there devouring a late lunch, when this old man rowing a small sail boat against the wind comes around the corner, we chat a bit and he offers me a ride to the opposide side where I needed to camp to get my boat back this morning. Anyway, for some strange reason still unknown to me I declined his offer and instantly regretted it! He rowed a little more, then put up his little sail and covered the distance in 20 minutes that took me the next 3 hours to hike! doo..! 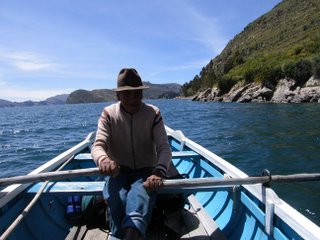 My old friend picked me up this morning and in the waves I managed to put a hole in my hand on a rusty nail while diving into his boat in the waves.Got my first good use of the bandages I´ve been carrying around for the past 3 months. On my way to La paz tomorrow.
Love, Eric 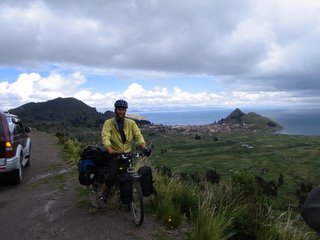 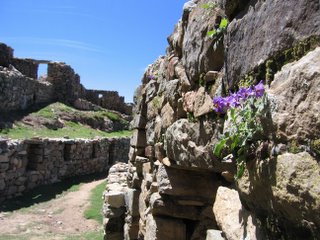 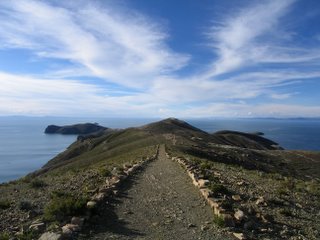 Hey there,
I wrapped up my obligations in Cuzco and got the heck out of there, I was having enough of ¨mi amigo, ..buy this..¨everytime I walked anywhere. The night bus was ok, very bumpy road even though it was paved. Had a really hard time sleeping and am still in la la land despite a solid two hour nap just now. But I´m really excited to be in Bolivia! Lake Titicaca is huge and beautiful. Going to spend a night getting my head screwed back on then do a trip over to isla del sol camping for a night or two.ok
bye bye
Eric
Posted by Eric at 9:06 PM No comments:

water filters and rain and buses oh my!

I´ll elaborate more later maybe but I just got back in Cuzco. The bus trip that took 3:15 on the way out took almost double coming back just now! Its a shitty road pretty much constantly switch backing up or down, and we had a ton of rain which made the rocks fly all over the road, also the police decided to give to bus drivers a hard time so that killed an hour, then more bus problems, then we ran out of gas 500´below a 13,000´pass before Cuzco. Phew!! I got off and practically started running back to the central part of town in frustration! The trip went well overall. It was a real eye opener.I have no idea how the EWB (Engineers without Borders) folks found this village, its a little spot on the side of the hill with 250 people growing corn and fattening up pigs and sheep. Hard living conditions, mud and crap everywhere.

I arrived yesterday after a relly early bus, and wasmet by Maria, who has the community phone at her shack. (fed off a satelite dish and solar panels).I met with the maintanace crew of the water system, it basically consists of a long underground aqueduct from another ravine, then leading into the new Sand filter, then into a concrete building which is the storage tank. Overall the Language barrier was really hard, Spanish is their second language and only the young people in town speak it other wise its Qwechwa, which is a world apart. I felt like I just had a much harder time communicating with them than any other spanish speaking people.

I got the key to the school grounds and camped in the yard, which thankfully was really the only clean grass in the whole village!, or simply just grass! It poured rain all afternoon, all night and until about 11 this morning. I took my water samples with Daniel, one of the most trained water guys. It was good and just as I wanted, it gave me the context of what getting involved in these projects are all about. Anyway, time to cook some dinner.
More tomorrow

Eric sent us some new pics today...here they are! Machu Picchu and surrounding area, and the last one he titled "break dancing!" :) Laura 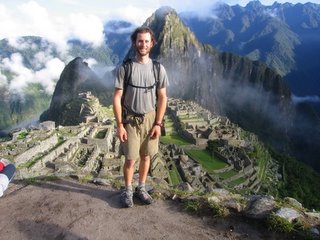 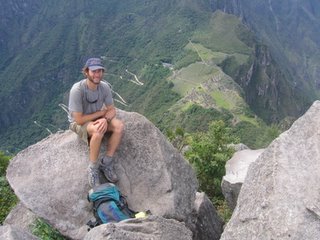 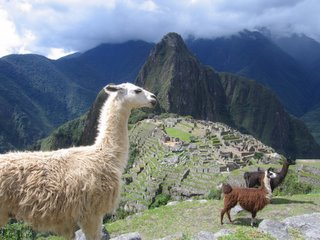 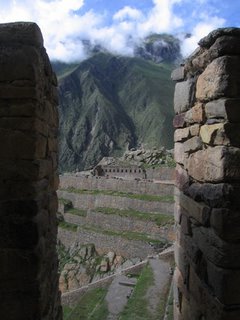 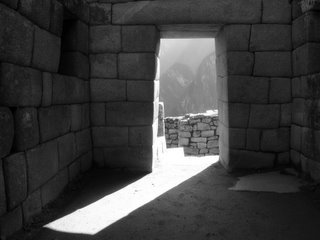 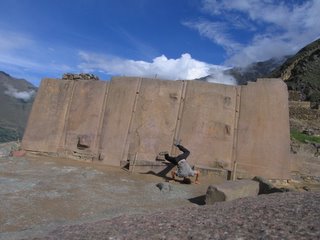 Some new biking pics from Eric 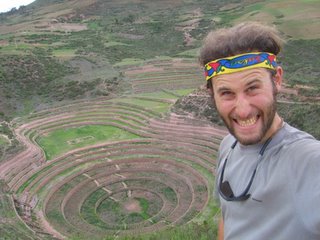 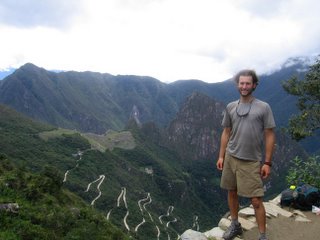 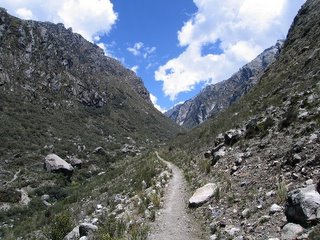 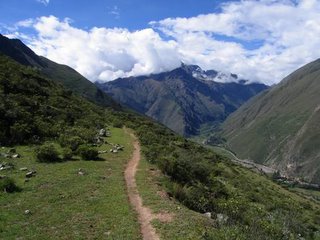 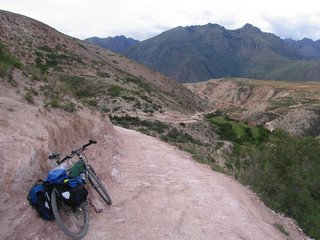 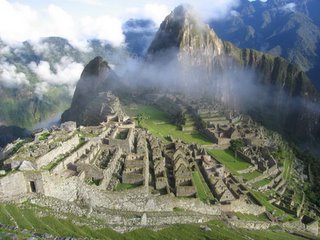 A message from Eric this morning and some links & pics of Machu Picchu :) Laura

Hi guys,
Just a quick note. I´ve been spending the past few days in the sacred valley north of Cuzco. Lots of cool little villages and loads and loads of Inca ruins and terracing. I had an incredible visit to Machu Picchu!! Took an night train, then started hiking up at 5 am to catch the sunrise up there, steep trail (and the busss are expensive!) The place in amazing, you can walk all over the place and I hike up that steep peak that is in the background of all the famous photos of the place. Really had a good time. As always my knee was giving me problems but I couldn't let it stop me this time. Met a nice couple from Colorado and we had a nice dinner back in Aguas calientes.

I spent the next day just relaxing and going to a new museum there before catching a 3:50 train back to Ollataytambo. Hung out in the little town yesterday and did a fun adventure bike ride on the other side ofthe river valley on these narrow trails leading up to an Inca stone quarry. It was amazing. Anyway I´m spending one more day in this area before heading back to Cuzco tomorrow. I´ll write more and send some photos from there. Going to a Soccer game in town on thursday, then have some work lined up next weekend to visit an engineer´s without borders project in a village 3 hrs away. get to take water quality samples, should be a good experience!
ok
love, Eric

Machu Picchu
Places of Peace and Power
Culture Focus : The Lost City
Posted by Eric at 1:09 PM No comments: