With my knee uncertainties I was hesitant to make any spring climbing plans this year, that all changed after a huge day at Turnagin when I realized that the thing was pretty darn solid and could tolerate big days again. So I plead to Billy, Yvonne and the group he put together to throw me in a duffel and that I would break trail, knock off cornices and melt snow as much as possible. It worked. I threw all my shit together and within a few days we were flying out. The unfortunate last minute drop of Paul due to a cold brought the group to 4, which worked out well as far as camping and climbing goes.

The upper talkeetna is a seldom visited area. All the attention of climbing and big mountain glacier skiing goes to the Alaska range, High Chugach and the Wrangell St Elias. The area around mt soverign in the middle of the Talkeetna Mountains is quite remote, about 40-50 air miles from anything. The bueaty of it is that we had the whole range to ourselves, no other air traffic, and it all had a air of adventure since we really had no information at all about the peaks other than the topo maps.

A fat base camp, alot of good food, a week of perfect high pressure and countless peaks to climb it was hard to decide what to do and we quickly set to work exausting ourselves.

First up: Mt Soverign - why not start with the highest peak in the area?
What appears to be a technical climb on a wall of granite actually is not the highest point, the real summit (on the map at least...) lies to the west, up a long, long ridge. We were all sucking wind with the quick jump from sea level to 9,000'. The snowpack was also horrendous - under a thin crust was bottomless granulated sugar snow and you would wallow in knee to waist deep. What looked like a straight foreward walk-up proved to be pretty tough! But we did get a good view of the entire area and got to drool over other objectives.

High on the peak, camp is the speck on the glacier mid level towards the left:

Descending from the top:

We got lucky and were able to glissade much of the way down on a mellow gully that wasnt totally bottomless sugar, otherwise we would have all been totally wasted.

Day 2: Looking for a mellower day to acclimize a bit more we decided to head down glacier and explore a bit, it ended up being a big day as we skinned around and made a big loop by connecting a series of col's on the map to bring us back to camp. We made one good south facing run in the sun while working on our suntans...

We dubed this peak "The peak of many Couloirs" Bryce and I later climbed one of the chutes to the left of the summit. We toured around the back of the nunatak and gained the upper bowl on the right:

Higher up, Mt Soverign in the distance:

After skinning for hours, the descent was very welcome and it closed the loop back to camp. Although all the south facing slopes were slough avelanching from baking in the sun, our route dropped down one of the few slopes that didnt have a big debris pile at the bottom - always a good sign!

With recon done, it was time to get down to business. Billy and Yvonne decided to head up the face right out of camp, while I talked Bryce to head up a steep couloir on the east face of the same peak with a mixed top to it. We set off with lots of gear, double ropes, rock rack and mountain boots to change into. Here is the cooler from the east.

We were really camped just below the peak to the right. After the skin to the base we realized it gets baked by morning sun (duh) so we dropped the extra gear and headed out to a peak we later dubbed "the iron nipple" a few miles across the glacier. From the col between the iron nipple it looked straight foreward, but what looked like sastrugi turned out to be breakable crust into waist deep sugar snow... yuck... you can see the trench we made in the first photo, we made it up the rocks a bit and said screw it.

Luckily there was another peak we could try from the col, so we half heartly headed up that, fully expecting for strike 3 from the snow conditions. Turned out ok.. we skinned high and carried our boards over the top, in the back of my mind I just knew we could traverse the peak and have a south facing descent...

He also loves steep booting with his skis on his back.. really...

We summited the peak and scoped the descent, a steep downclimb above a gaping bergschrund runout.. humm better not board it.. so we downclimbed then traversed the bergie and finally made sweet corn turns in the lower bowl.
Bryce's photo:

Billy Took this shot of us high on Sugar mamma, we are just barely visable in the lower part of the shot after descending the central Couloir and traversing left above the gapper.

Turns out it was sugar snow all the way for them, with some alpine ice (covered with sugar snow of course...) at the top. From there on all peak names were derived from sugar, or sugar substitues. We made it back to camp quick and I got Billy's big Nikon out to get some good shots of them descending the face:

Getting more and more familiar with the conditions and peaks, Bryce and I went for an ice route I had been drooling over for the whole time we had been there. It was to be Bryce's first alpine ice climb, so he was stoked, in a anxious sort of way.

We set a hero skin track up to the base of the face over the bergschrunds and got on the rock to the left. We lead up two pitches or so on the snow using some rock gear, pins borrowed from Billy and nuts for anchors. The rock was so perfect and free of cracks that the pins saved the day as we hammered in knifeblades with wild abandon.

Higher up...the snow thinned out and had brittle glacier ice below it. The climbing was secure, but screw placements were a bitch, requiring serious chopping to get to decent ice. We brought 7 of the groups 8 ice screws and we were wishing for that one more.

Bryce's shot of me hacking away!

The upper ice was totally sweet, steeper than we expected, but really secure placements.

Billy got this distance shot of us topping out the ice:

From the top of the ice, it was a mellow scramble to the summit.

The descent was more involved than we had hoped for, it ended up taking just as long as the ascent, we belayed downclimbed the rock shoulder on the left side of the peak and it was actually steeper in spots and way more exposed than if we had just downclimbed the ice, jeeezze. Traversing sketchy 75 degree sugar snow with ice isnt a good thing. We were glad to be off the thing, cranking some evening turns back to camp was a bonus.

a rest day please... no must keep climbing... a morning conference in the megamid determined that the weather was indeed changing and we needed to make the most of it. A cold wind pushed us the 4 of us down glacier to the famed Peak of many Couloirs. Yvonne and Billy headed further down for a Couloir that looked to make it to a straight foreward ridge, where Bryce and I headed to a steep and striking couloir which we had no idea where it would go after that.

Turned out to be perfect re-frozen neve, sweet! on went the crampons and we soloed up the whole thing.

At the top the angle kicked up considerably. I was nervous that our luck would run out and we'd hit sugar snow at the top out, with 1,500 of steep hard neve below you that's not a good thing, on went the rope and in went some gear for the top out. 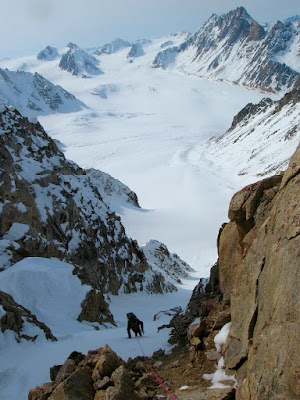 That was it, the ridge was super exposed and sketchy, not for us.. down we went.

Then the storm came.. climbing was done. Two days in sloth mode, lots of megamid time, a day skiing in a whiteout, a day building a kicker.. another day waiting in a whiteout and out we flew..

This now constitues the longest and most time consuming blog post ever. Hope you enjoyed it!
Posted by Eric at 11:43 PM 5 comments:

Heading up into the Talkeetna mountains, Mt Soverign area tomorrow for 10 days to climb and do some ski/splitboard mountaineering.
Some pics of the area: 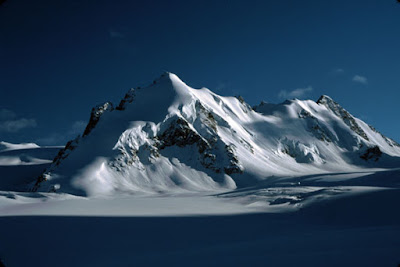 The weather looks good so we should be able to get in as planned, one at a time in the back of Mike Meekin's super cub.

I also decided I needed a new climbing pack, its been in my head for too long so I cranked this puppy out. its a bit heavy, but super duper burly and can handle heavy loads better than my ski pack. Design based on the BD Quantum, but with a removable hip belt with pockets that uses the same webbing, side pockets for pickets and a 4 point removable lid.. which is yet to be made. it should last a long long time. 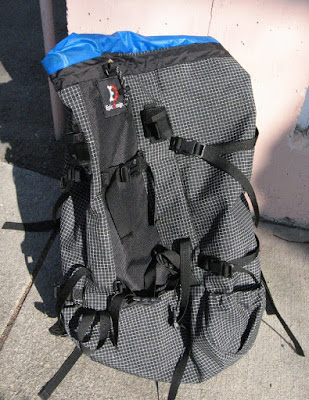 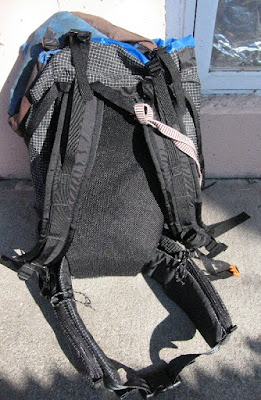 Big weekend, I'm tired.
Gave the sewing machine a rest and got down to business playing.

Huge day skiing on Saturday something like 12 miles and 7,000' vert in 10 hrs. Covered some serious ground. Up sunburst, over taylor pass, to Pastorial, steep ridgelines, santa claus chute and then some. 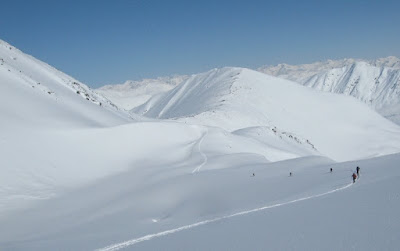 We were aiming for the Santa Claus chute, a north facing chute, but first we had to traverse this ridgeline.. it was a bit airy and had us all wanting ice axes...

Billy pokking around the corner: 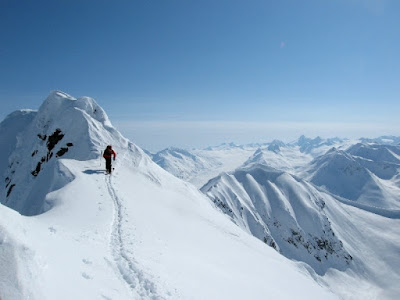 Me probing ahead, photo by Billy: 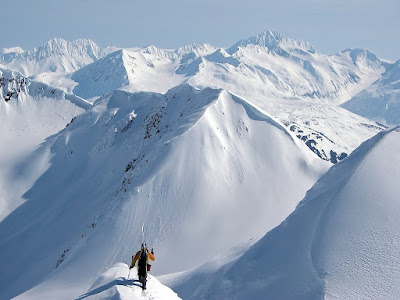 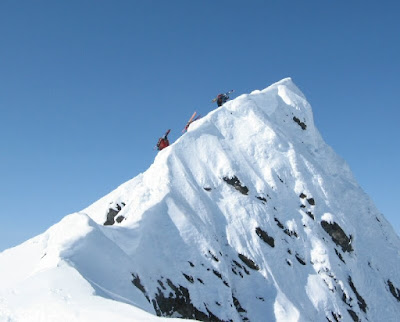 i'm pretty at home on sketchy, exposed snow, that's why they invite me along, so I ended up breaking trail & route finding getting to the col. We came over the pass in the far background. The views were nothing short of stupendous in all directions! high pressure rules!

Billy, Yvonne and Bryce are the 3 dots in the middle on the ridge. sweetness: 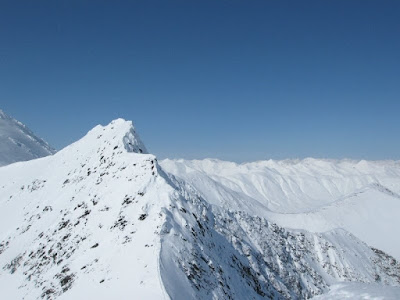 Billy took this one of me looking back, we ended up dropping down the face to the right of me: 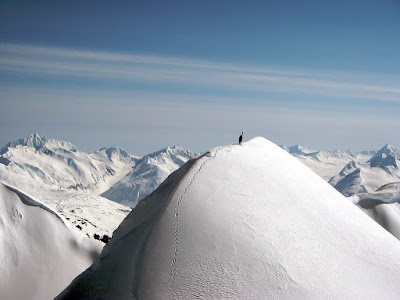 Although warned of the south facing snowpack we were lured the run partly by my stoke level on the asthetic line, and part of a totally bomber snowpack. 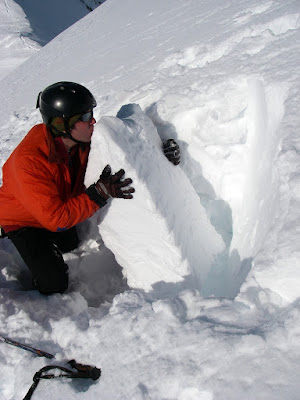 3 good fast turns then hammered, I dont want to talk about it... we half skined, half booted out of the basin, pure work in the sun... 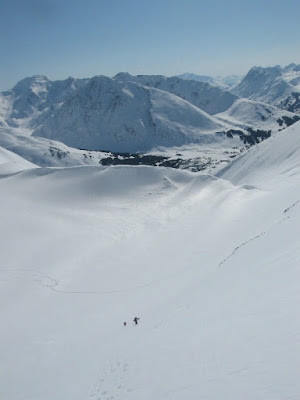 Then it was time for the goods, santa claus chute.
Here it is in the distance, its the obvious big notch on the ridgeline, the peak we traversed is to the right. 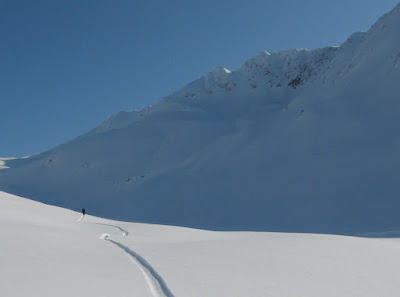 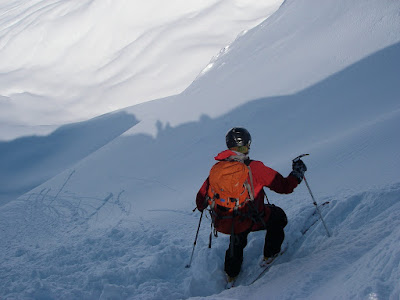 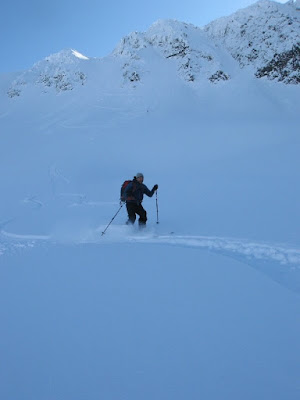 did another half run on the lower part and began the long cruise / double pole / skate out center ridge. The Swallowtail was in effect - check out the rooster tail! 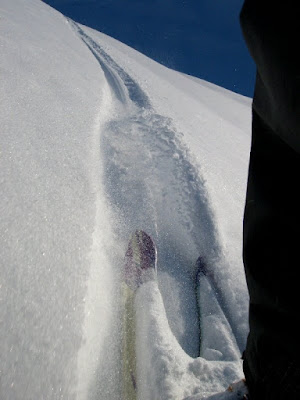 Sunday Bryce and I went to Eklutna Canyon for some late season ice climbing. Had the whole canyon to ourselves. It was my first time on ice this season, but managed to lead Ripple. good stuff. Then we did another somewhat stiffer route with Bryce doing the lead duties. Nice place to be after a big day skiing. 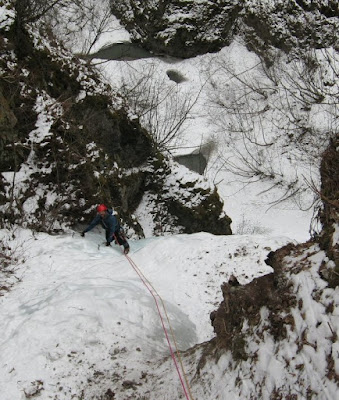 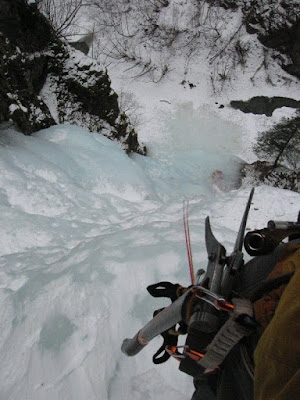 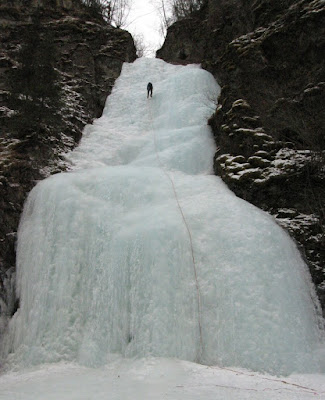