Mr. Dylan Kentch just left Alaska en route to the lower 48. He's starting a year (or 2?) long trip from Seattle down to South America via Mexico to Brazil & Argentina on an lugged steel 80's vintage singlespeed. I would not put a repeat of the Darian gap crossing beyond him. 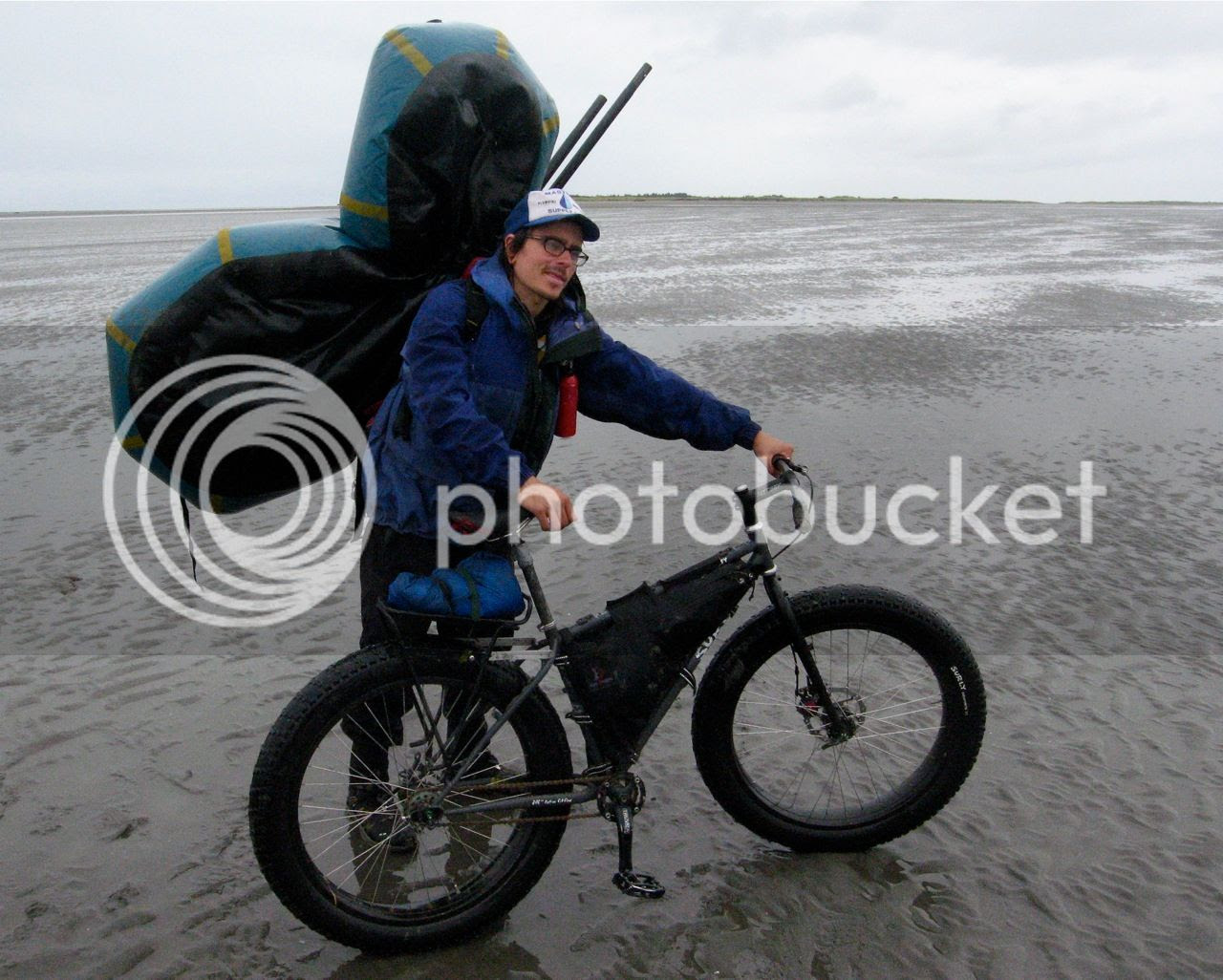 If you happen to see him along the side of the road in Washington, Utah, Colorado, New Mexico etc. Please give him abundant food and shelter.

Mr. Dial came by the shop yesterday for a 3+ hour Alpacka binge sewing session.
I think he was pretty excited at the results!
Thanks Roman

Long before I even moved up to Alaska I had read about Roman's hell bike missions. Traversing the Alaska range? where the heck is the Alaska range? Roman and his partners took wilderness mountain biking to a place where followers (even fueled by modern cookie dough!) would be hard pressed to reach again. We stumble along humbly in the footsteps day dreaming of riding across the Black Rapids Glacier and eating bacon grease for 40+ days.

He's the kind of person who picks something and takes it to the highest possible level before moving on or loosing interest or motivation. Obsessive possibly. Highly Driven Yes.

Now, with packrafting he's pushing it to new realms it's never been, and his enthusiasm is highly contagious. (six mile on Solstice anyone? Knik arm attempt duex?)

Have fun in New Zealand Roman... and stop feeling so Guilty about leaving!
Posted by Eric at 3:18 AM No comments:

ok no more doom and gloom.
Here is a stitched photo from biking in the Quimsa Cruz.
This spot was pretty nuts, we descended from a 15,300' pass and hoped to drop some, but all we found was a frigid wind off the glaciers and abandoned mining ruins inhabited by enormous high altitude feral rabbits. Around the lake and back up we went to some even
higher unnamed pass!

This pretty much sums up my feelings recently.
It will make sense in the next few months.
Posted by Eric at 2:52 AM 5 comments:

The "Omega High" pressure has caused a crazy inversion for the past week +. Resulting in lots of fog and not much sun. So it was time to go find some above the fogged in city. Billy offered a boondoggle and even if they aren't' they are. And I always seem to bite hook line and sinker.

Up we went, around Corn Biscuit to to Goldpan. The glowing orb in the distance is the sun. Yes it still exists. 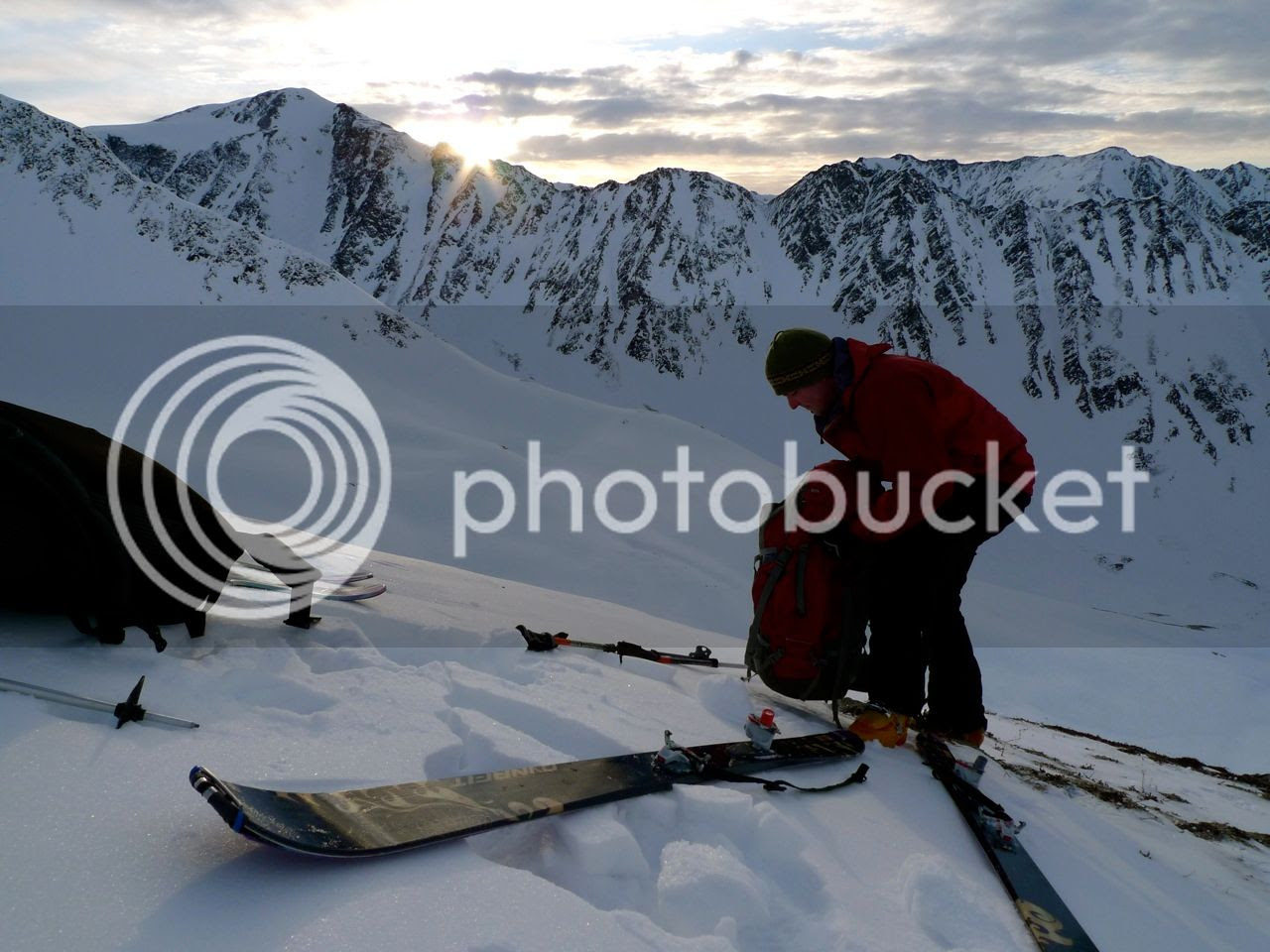 The main chute on Goldpan usually has a school buss cornice and is downright spooky looking. But with the stability it looked feasible. 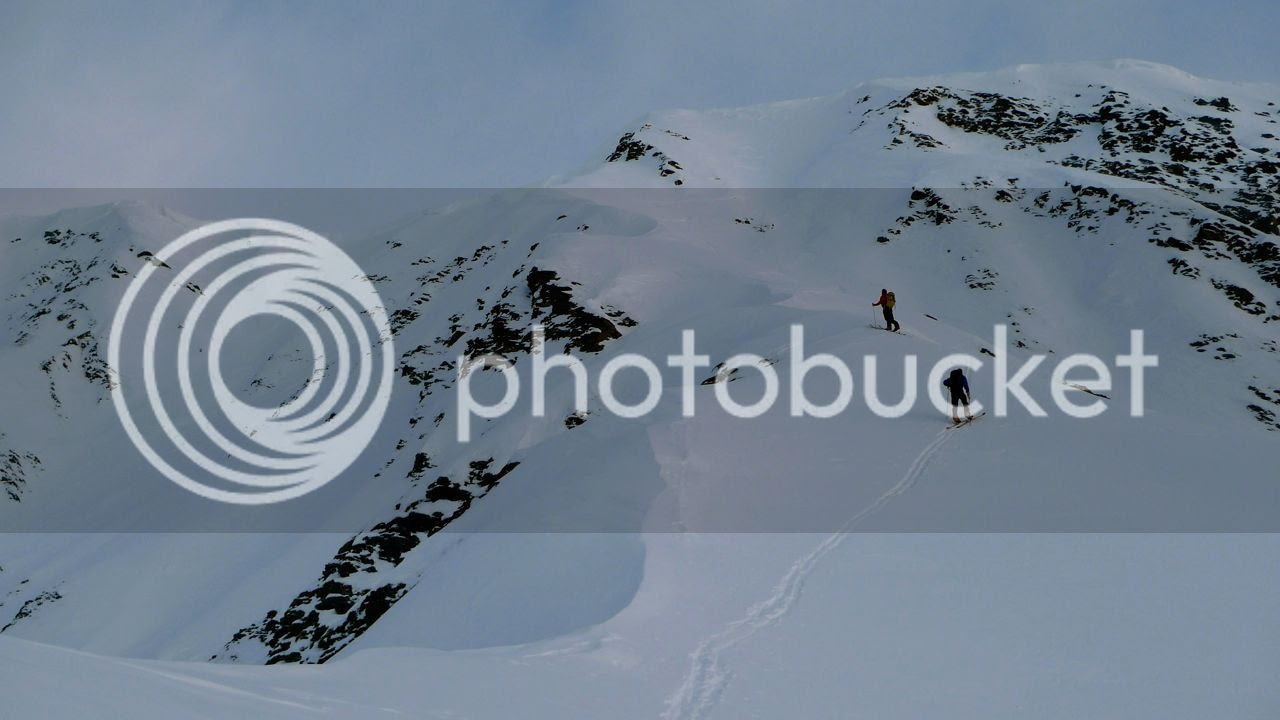 Kevin and Ryan passed us. Thanks for the skin track and boot pack guys! 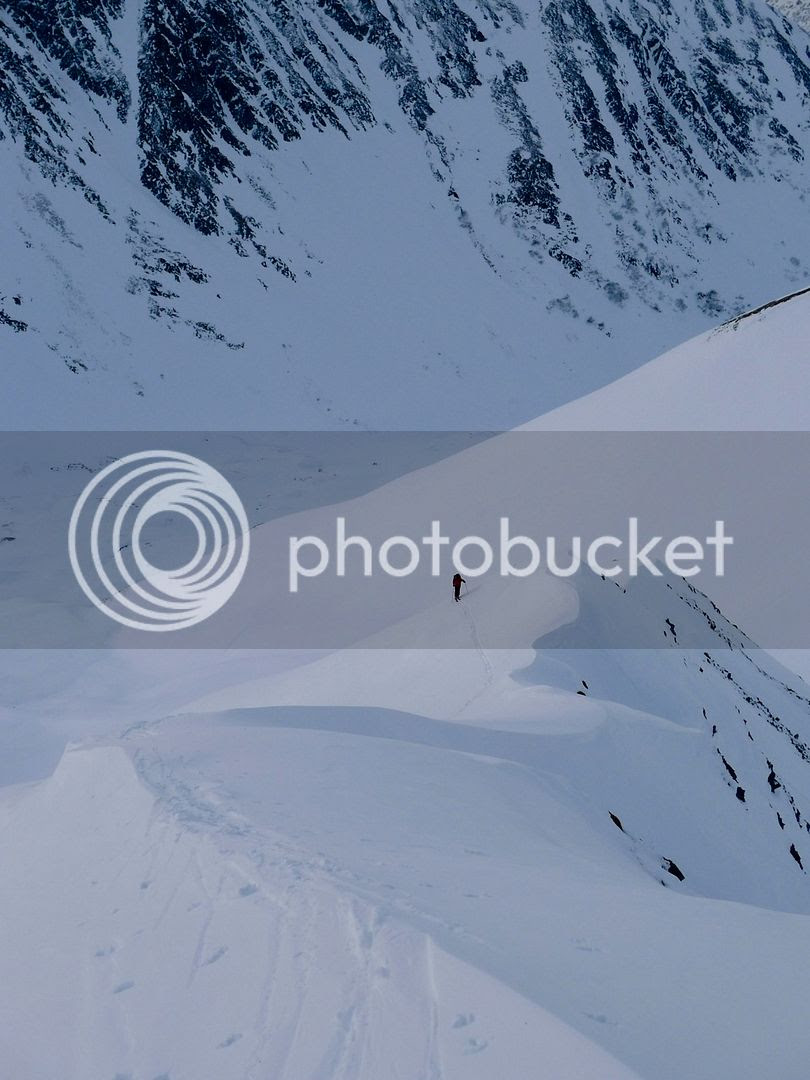 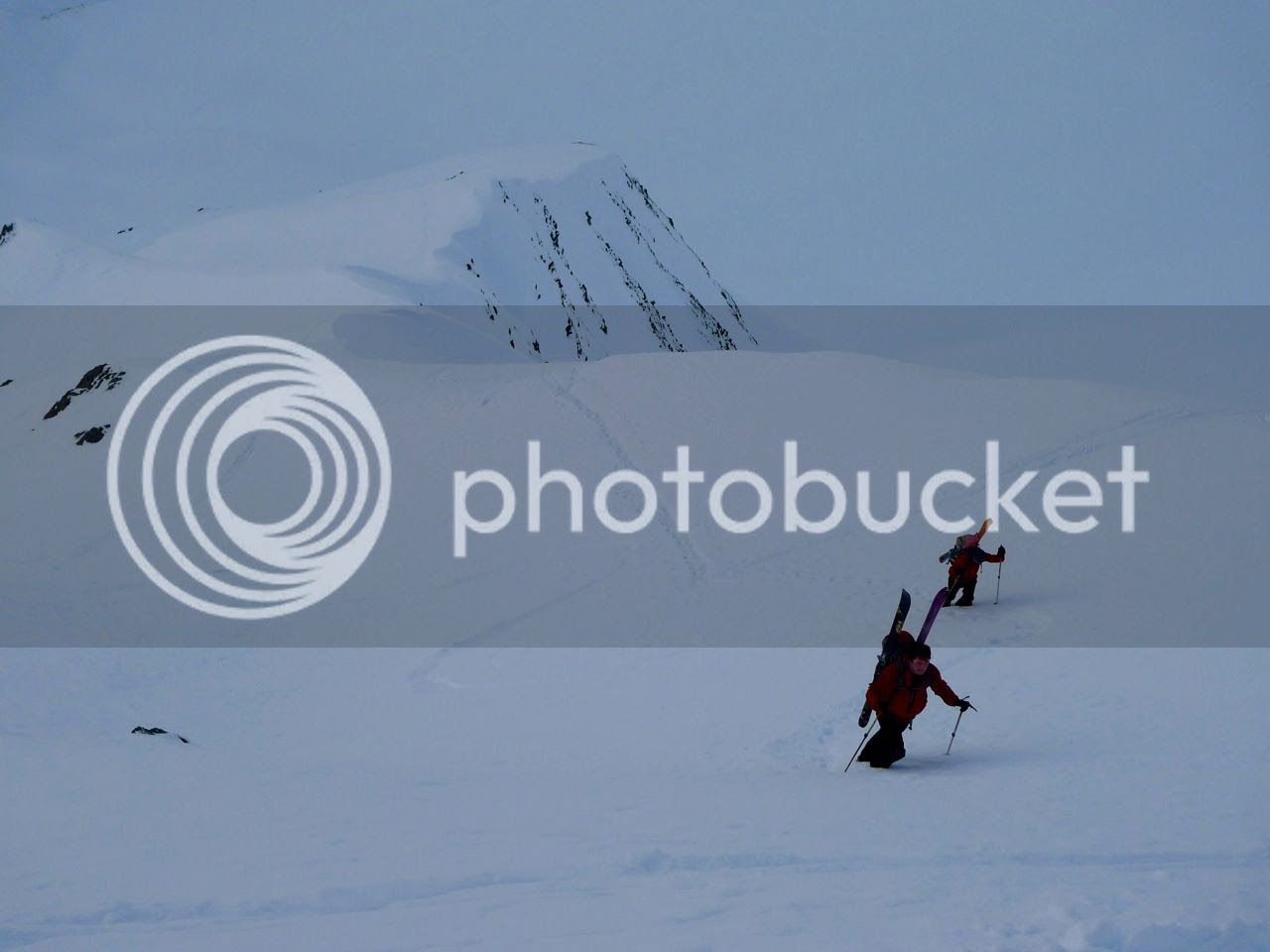 Hard and crusty entrance gave way to more of the steep chute. Then the flat light fan lower down. 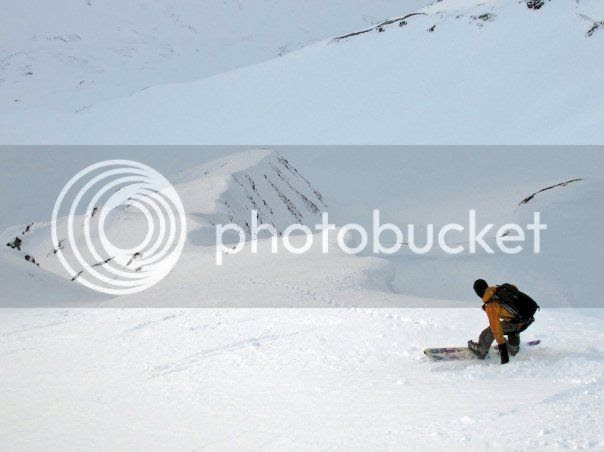 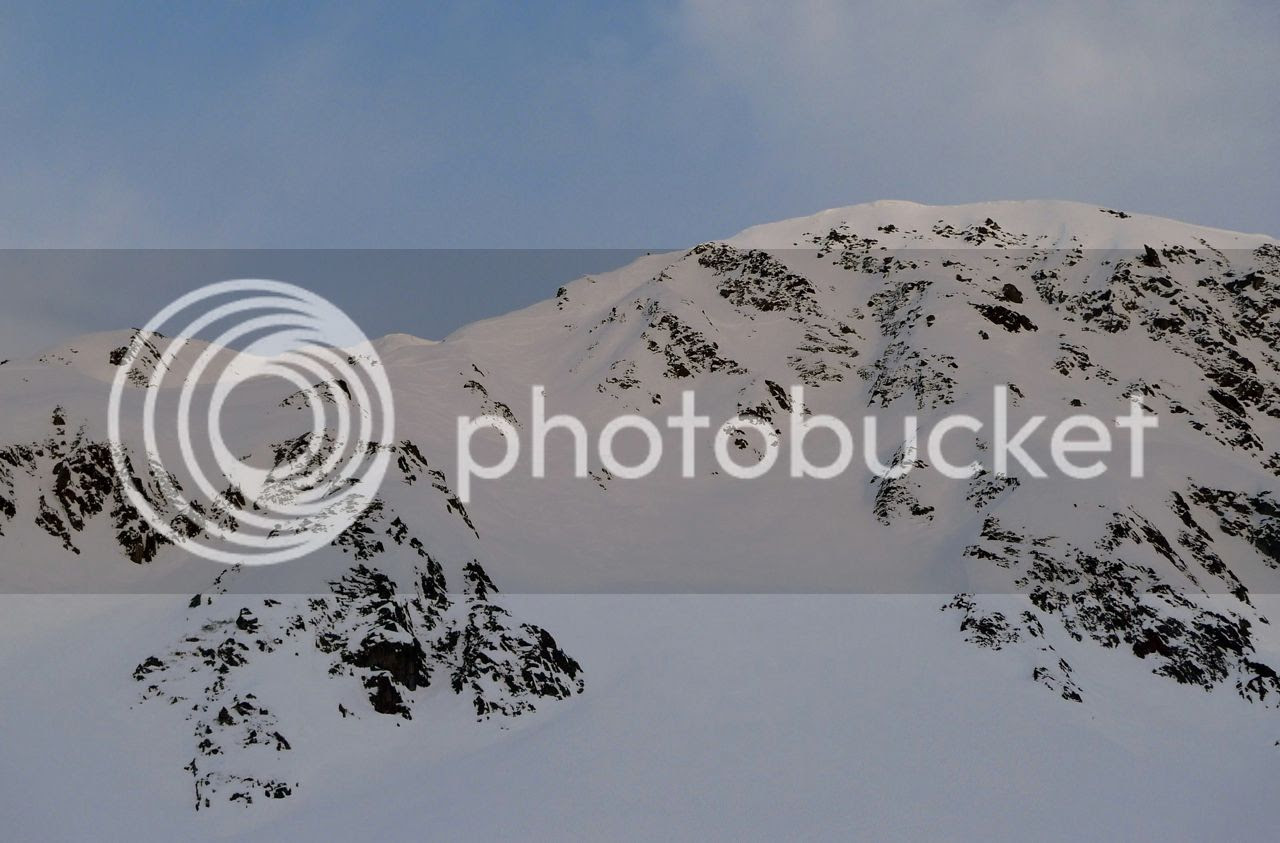 Stoked on the run we headed up the back side of Corn Biscuit to hit the Corner pocket Chute. 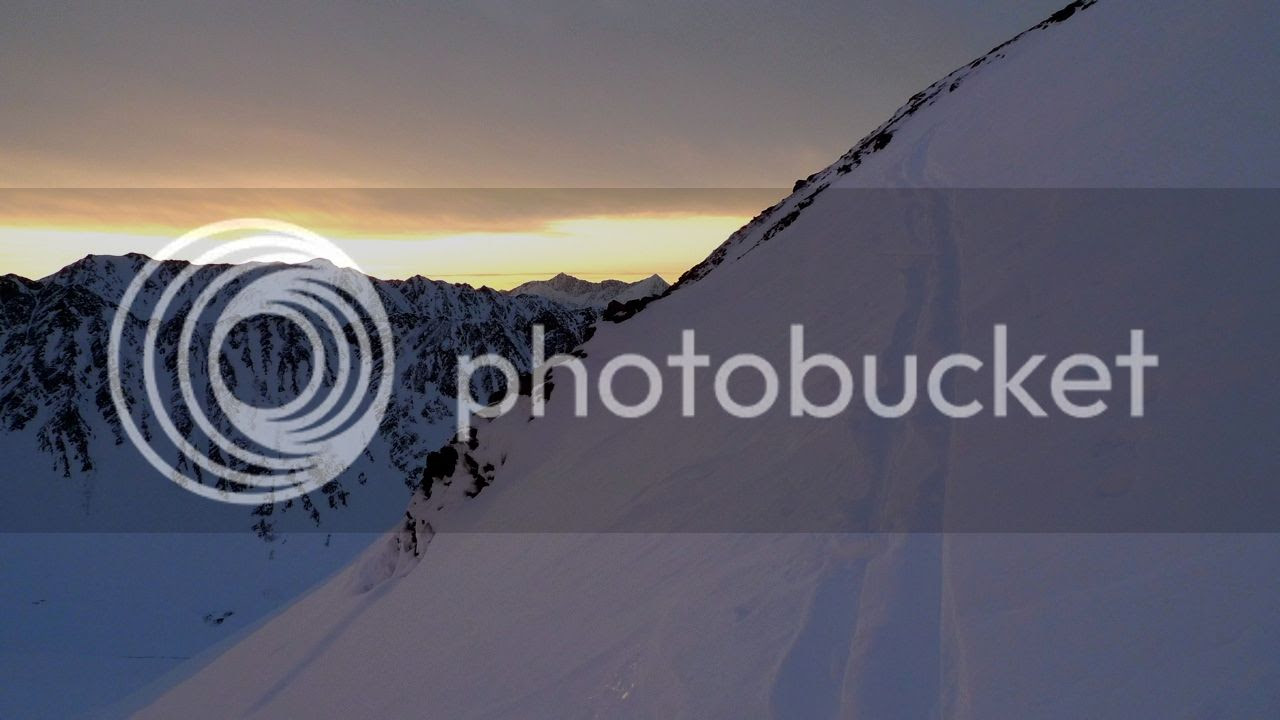 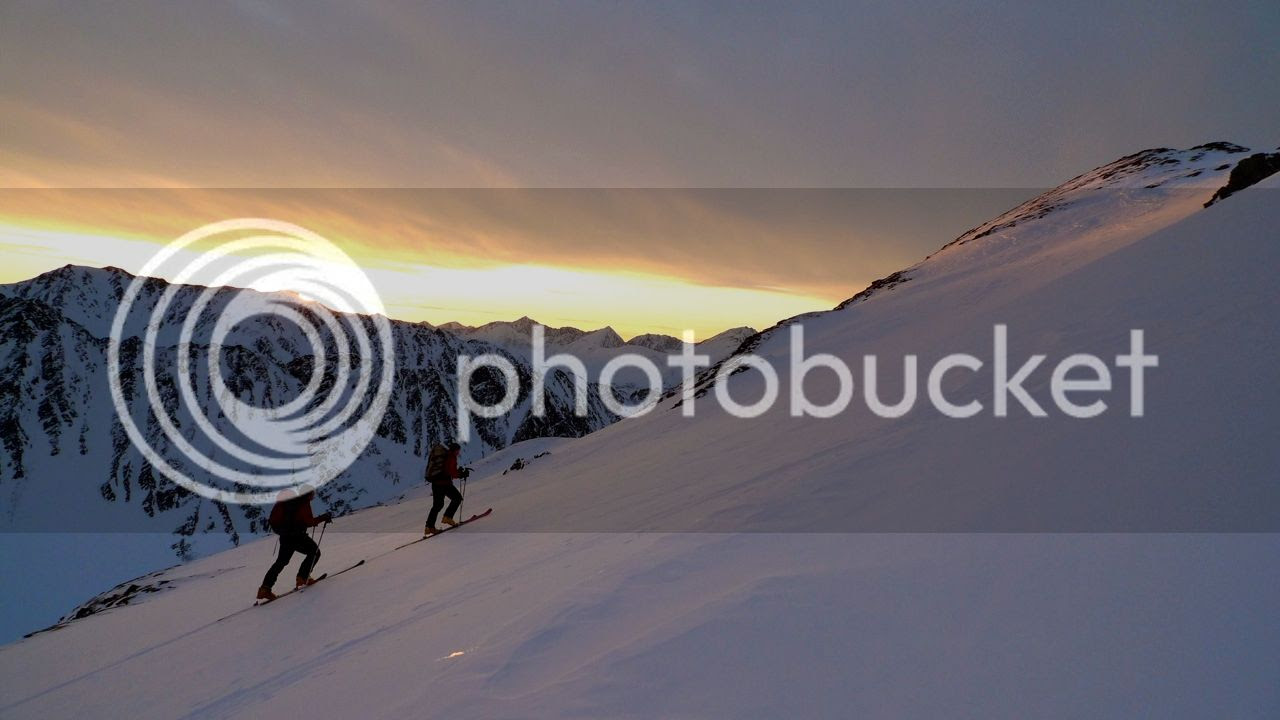 Righteous sunset even if it's at 3:45. The Chugash just soaks it up... 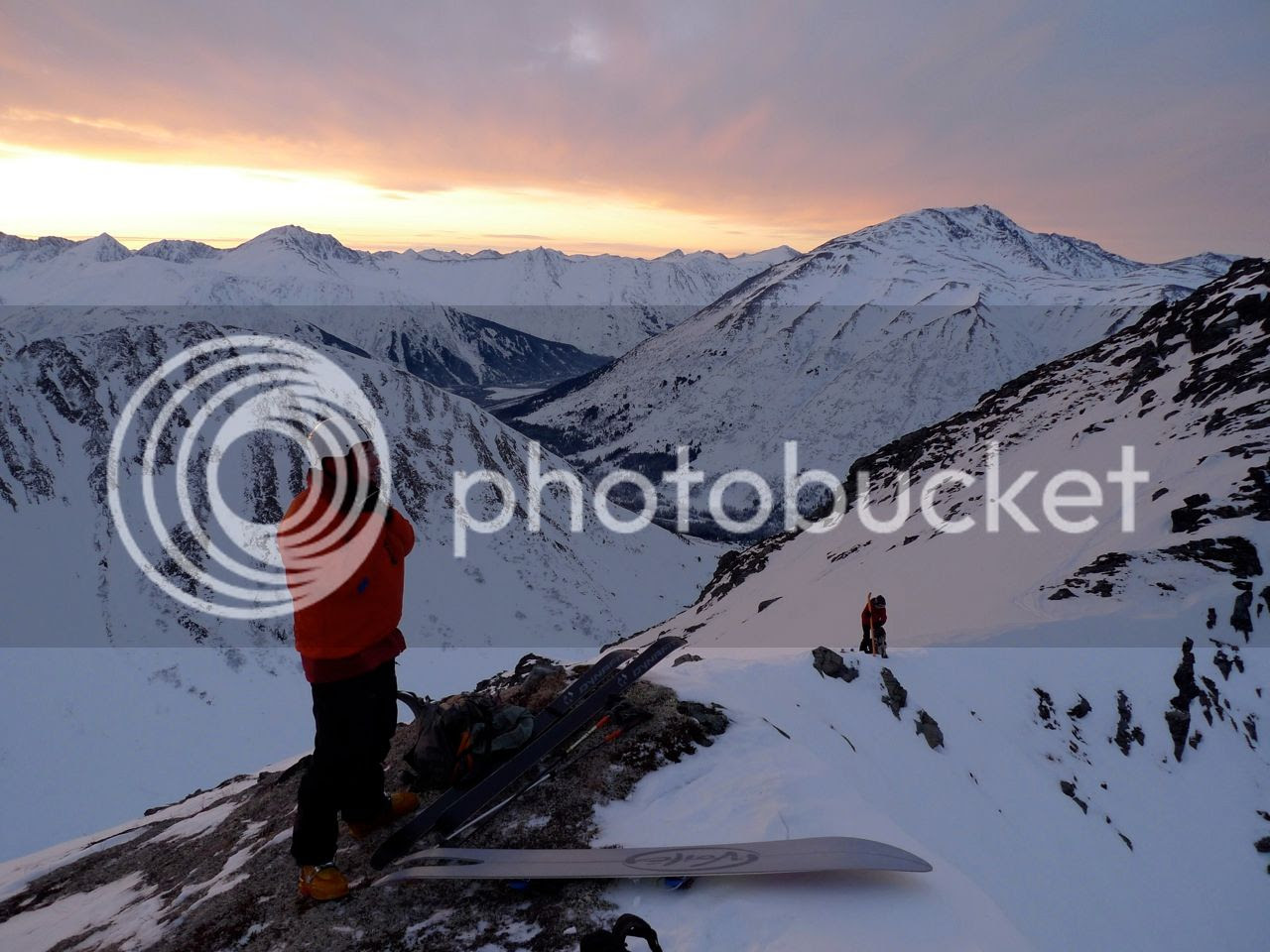 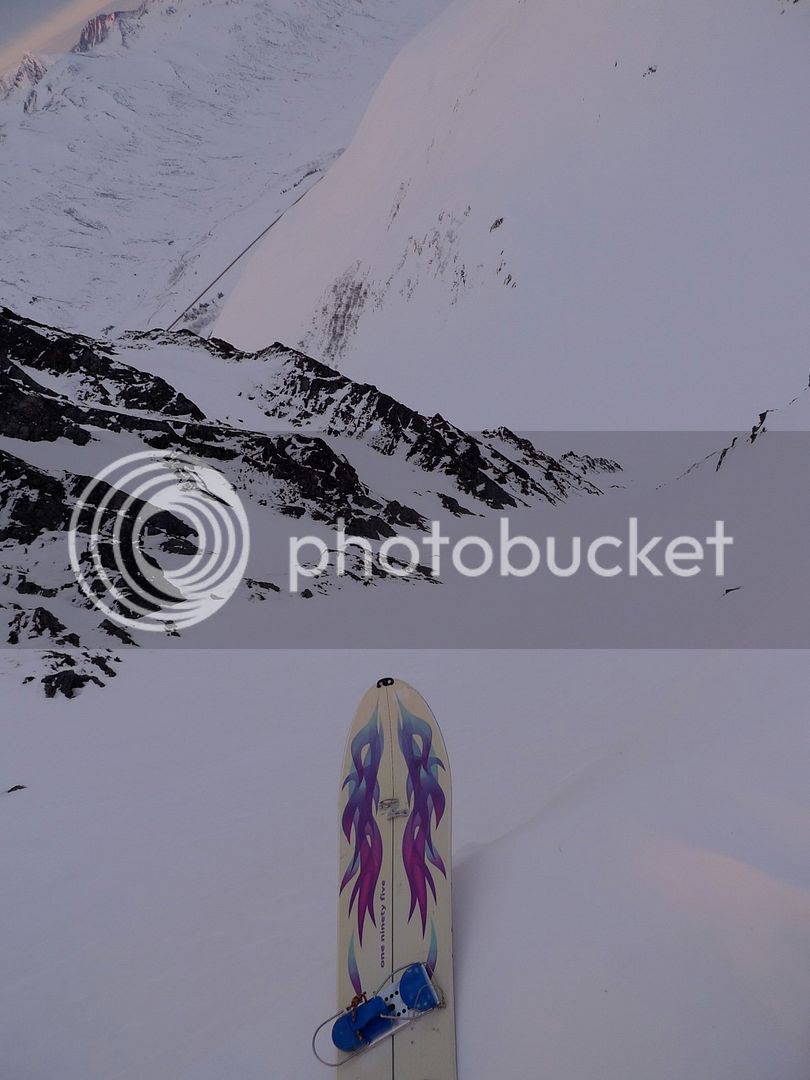 Fantastic day out. who cares if the snow sucked. 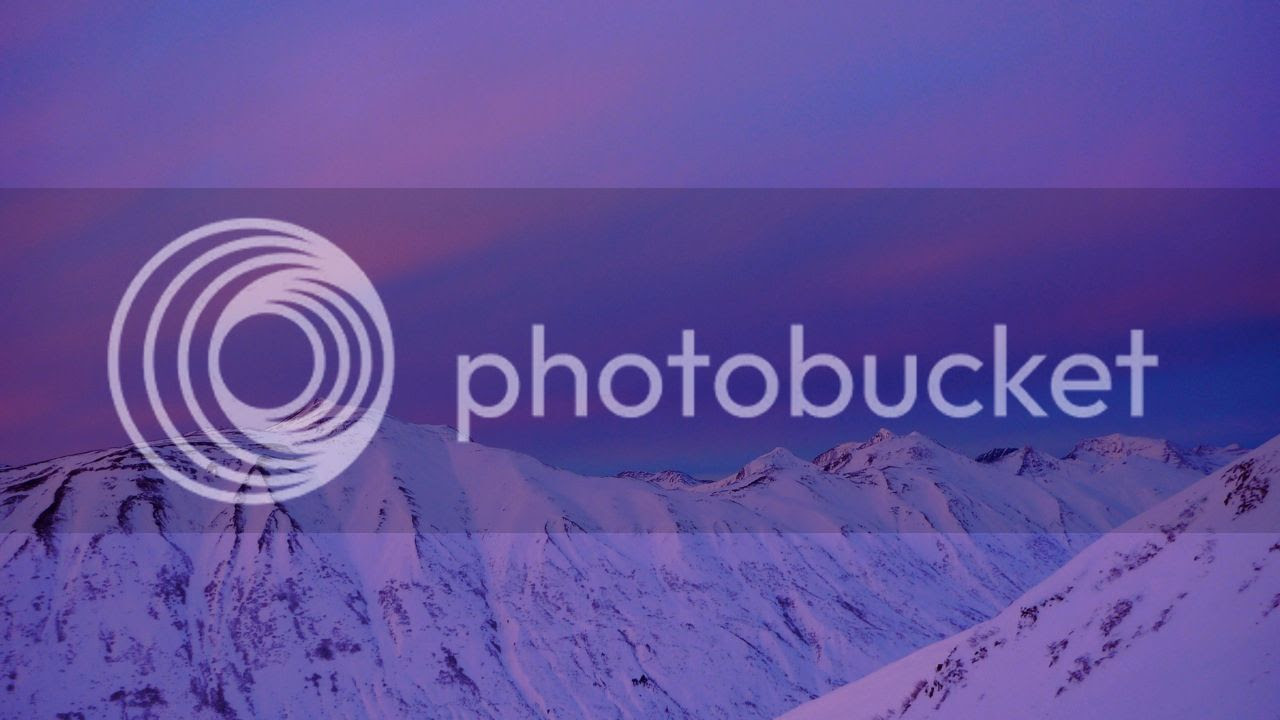 Thanks Billy and Yvonne!

Lucy is a Killer.
The death toll lately has been staggering and the bodies have been piling up. 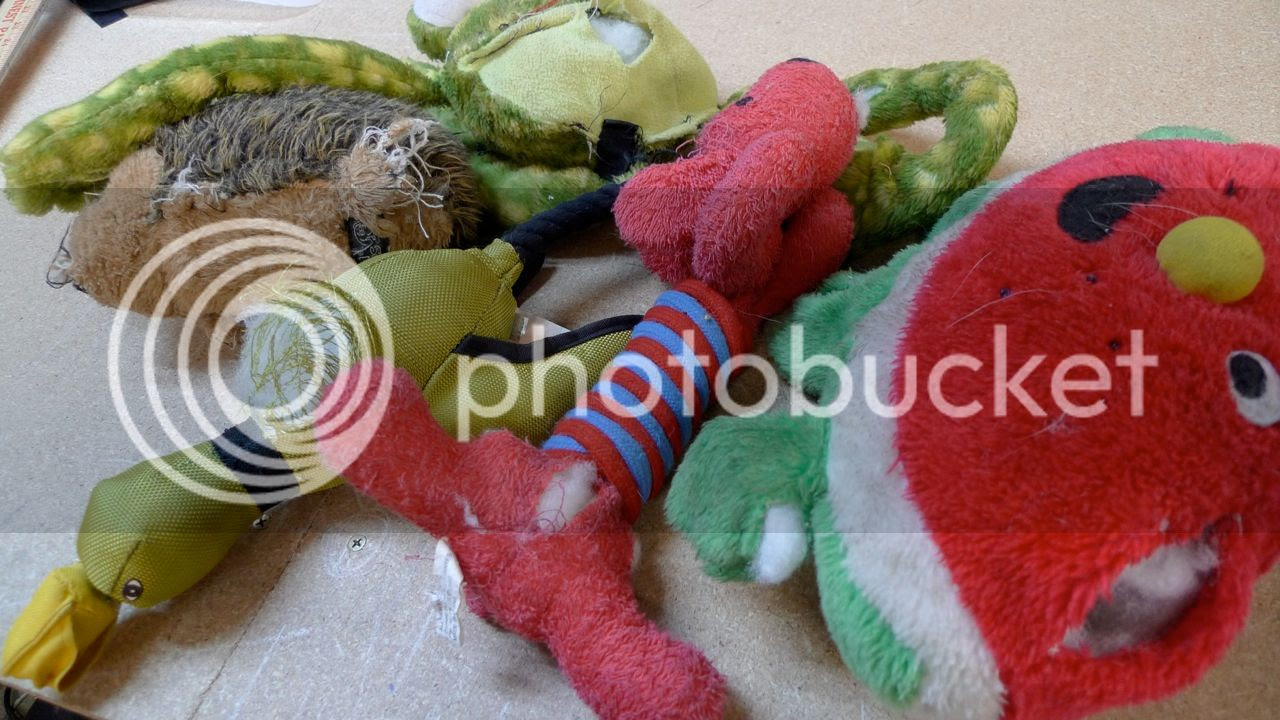 Medical attention was needed.. and Fast! 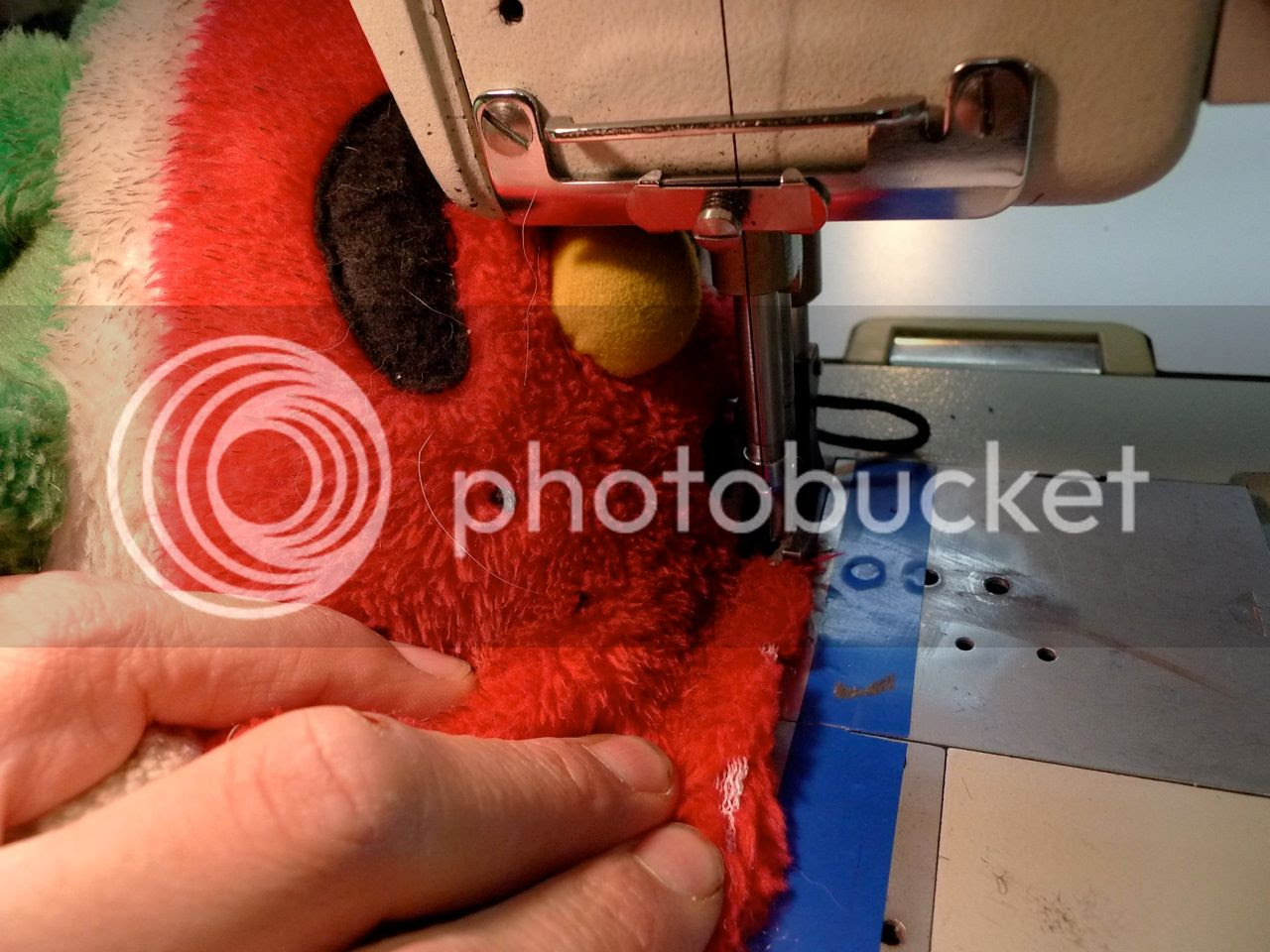 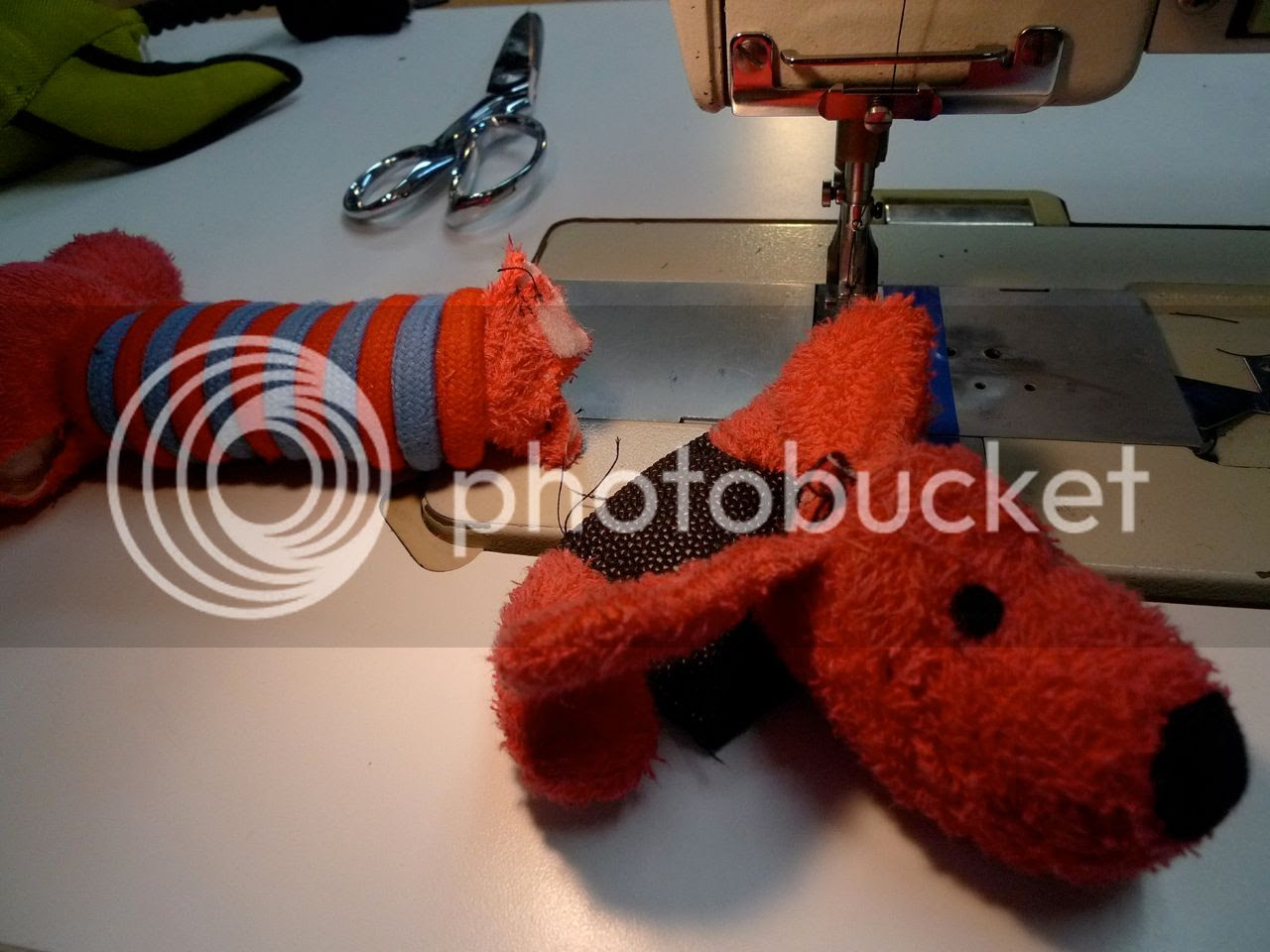 In the end amputation of the head was required. 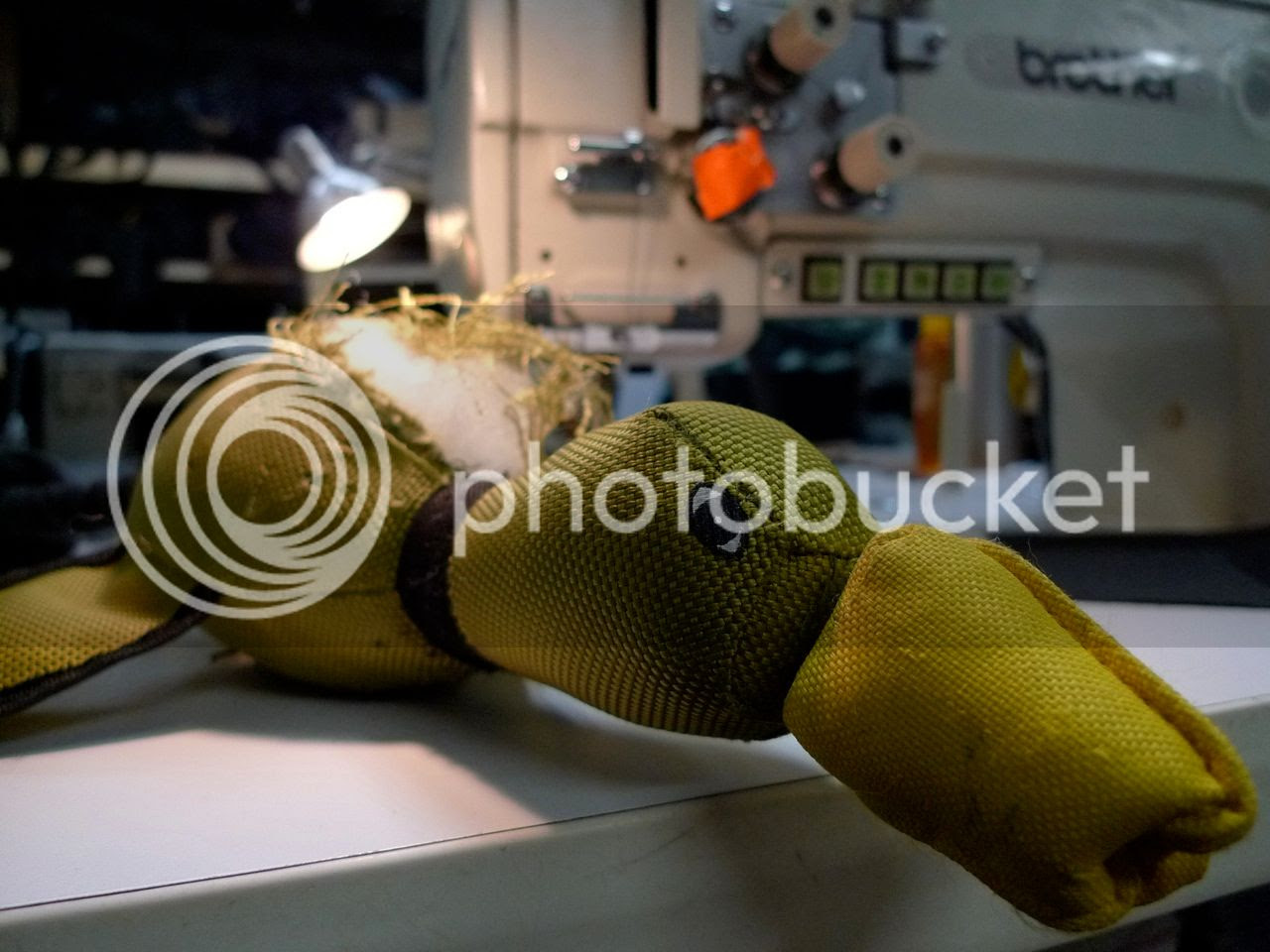 Mr. Bungee Duck was not looking so hot with severe lacerations to the the back and torso. 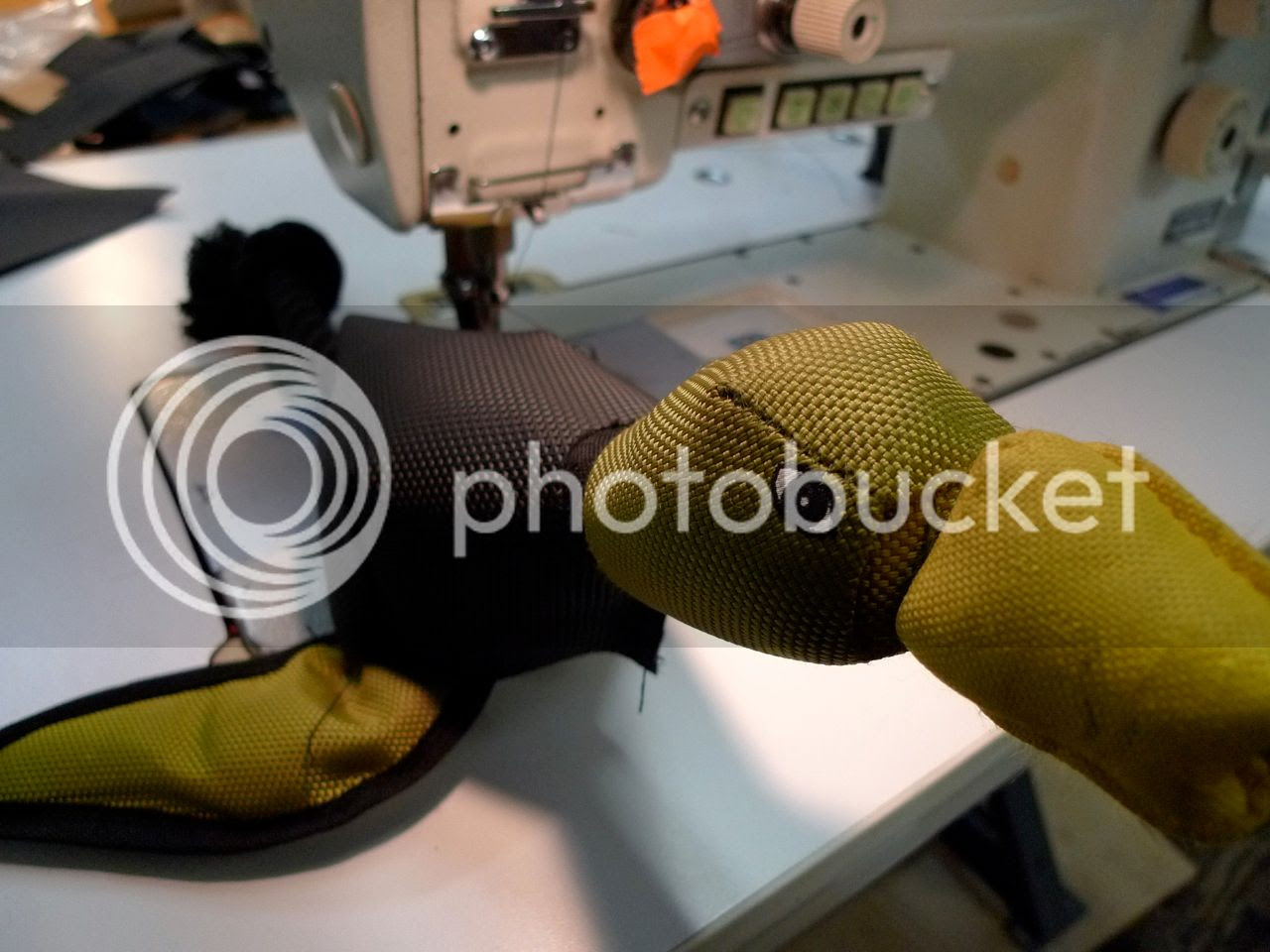 All in all it was a rough day to be a stuffed dog toy, but they live on to see more thrashings.

Inagural day at Turnagin. Rocked.
Thanks Jeff and Cathy! 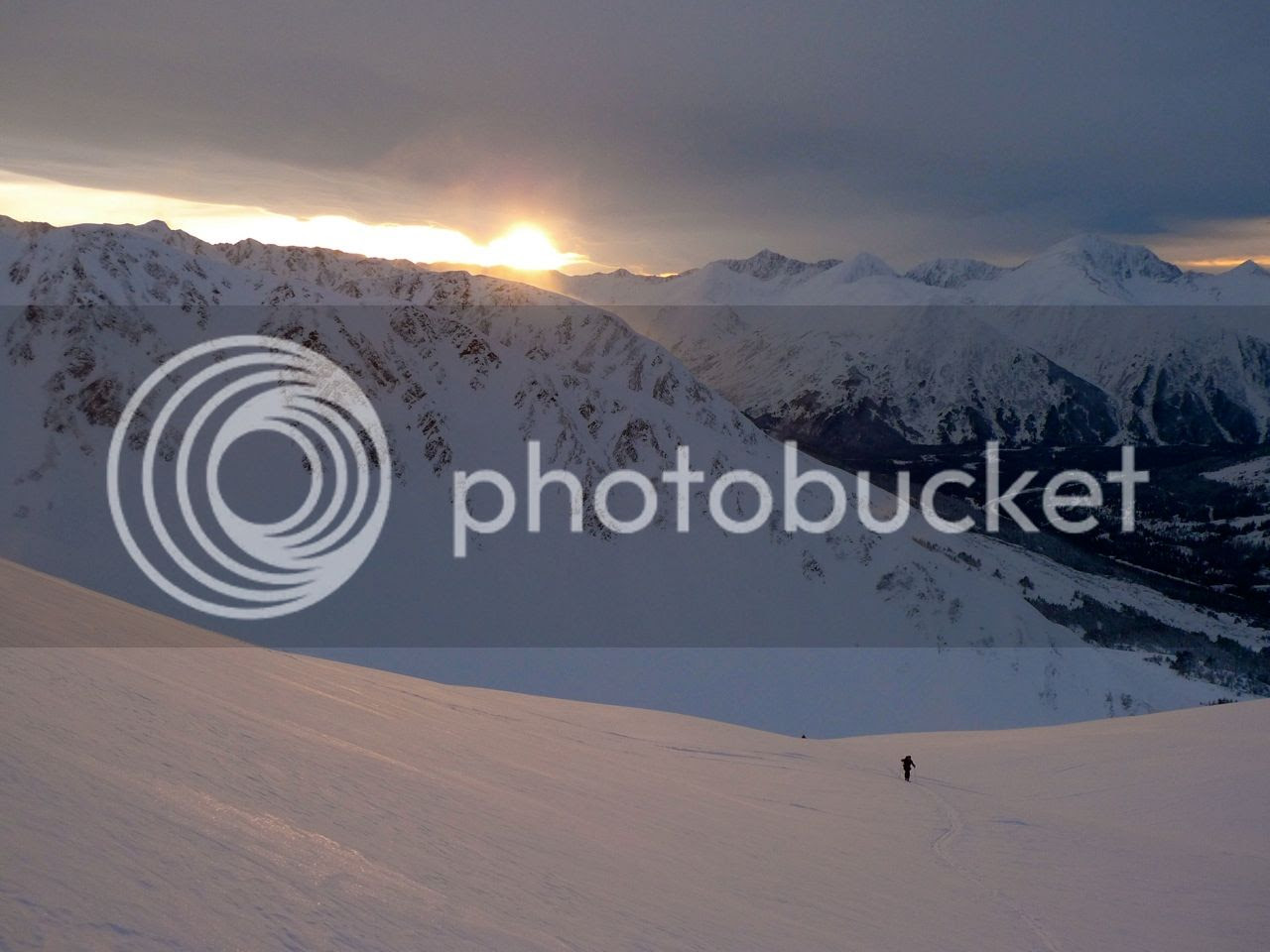 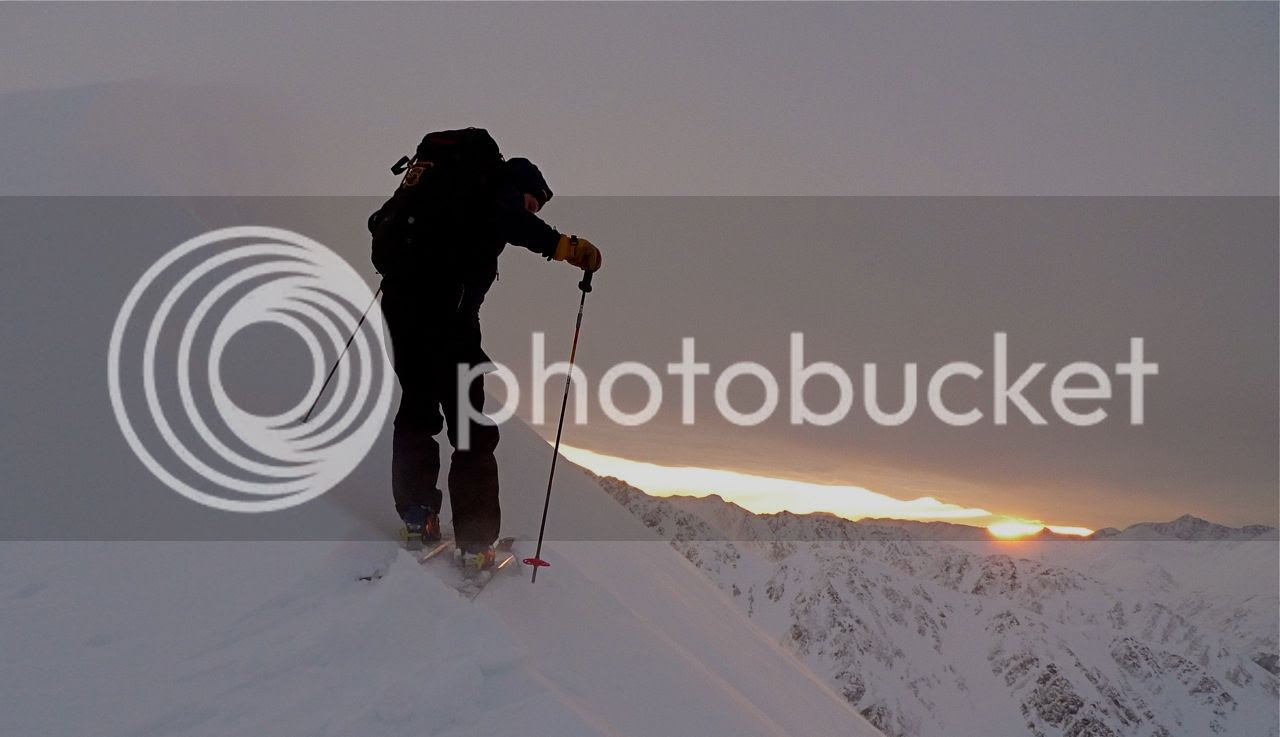 I try to keep this blog less about gear and more about doing, but what the heck, a  little geek out now and then never hurt.
So some random thoughts:

Bikes:
Touring on an aluminum frame with a thru axle suspension fork and 26" wheels is actually pretty sweet. Just like old days, I did not miss the bigger wheels really. Please don't hate me...

Schwable marathon extreme 2.25's are totally incredible tires. No flats, not a scratch in the sidewalls. Now they just need to come out with a 29" version. Way more dirt worthy than the XR's. Wish I had these on previous trips.

Bags - beat on and no complaints, at one point I had 25 lbs in the harness (water) , then later hung 20 lbs off the bottom of the seat bag and nothing ripped. awesome.


Camping:
Megamid worked as it always does, but next time I might consider bringing just the outer of a Hilleberg for better performance in wind.

Pads - Julie's Big Agnes primaloft pad leaked like a sieve - on the top fabric! It's gotta be defective. we could not keep air in it despite many patch jobs. My prolite 3 3/4 length was not thick really enough for the hard Bolivian ground, it's the same pad I used last time down there so I must be getting soft.


Bags - I brought a 20 synthetic because that's the good mid weight "alaskan" bag I have. A 15 degree down would have been perfect. No need for a synthetic down there. I also brought a ultra light primaloft hooded jacket and slept in it almost every night (with all my other clothes too!). My Mont bell alpine light down jacket would have been better and warmer. (Last time I had a 5 degree down and a tent...and was toasty the whole time, I must have forgot that when packing...)

Shoes - I brought my Sidi's and trail runners... mistake. I was just too lazy to buy new bike shoes with winter coming. J had pearl izumi X alp enduro's with flip flops... I was Jealous as she walked with ease on rocky stuff while I stumbled in the plastic soles (not much left of them), later the soles delaminated and they are basically destroyed now. whoops.

We barely had any rain, even though we were expecting much more, so thankfully none of that stuff really got tested or used in any way.

anyway, this was all mulling around. now it's not.
Posted by Eric at 2:09 AM 3 comments: