Cant go a week without doing something in Eagle River.
Hiked back 12 miles with Nora to the fording site but the river was too low there, so we back tracked and splashed around for a while on the way back. Echo Bend is sweet right now though...
Gopro helmet cam. Not great footage, but still learning the thing.

Edited and Posted a quick clip for Erin and Hig last night.

eating snow is good for you

It was hard getting anything done on Tuesday, Bueatiful high pressure - the mountains were calling, but I didnt act on it. A evening hike up Brid ridge with Dan confirmed that I did indeed need to get out for a full day next chance I got.
Woke up, same bueatiful weather, pounded coffee, cereal and emails and out the door I went.

Word in the Chugach was that Korohusk Was in good shape, and I fully intended to poach Billy et. al's beta and boot pack. Got a late start, leaving the parking lot at 9:30, unheard of for a big peak in the Eagle River valley. oh well, I'm not going to have to break trail at least... so I thought.

Finding the game trail up to the Dishwater valley wasnt too easy, so I just started the bushwack.. all peaks in the valley worth their height begin with a good schwackin' and so it was:

after an hour of easy schwacking I found the real trail higher up, which was a big improvement, despite the huge piles of black bear poop, always a fun thing to see when you're alone with no pepper spray. The views were jaw dropping...

So I only brought one quart of water with me which I had already finished post-coffee. I was sure that I would hit dishwater creek which drains the hanging valley above... I was counting on this as I was already getting dehydrated in the warm sun and steep climb through the trees. next thing I know I'm on snow, no creek in sight, no water it would be, let the snow eating commence! yum! Slowly I worked my way up the moraine and up to the lower fan of the route.

The snow eating helped me get higher and higher, I also decided to loose my empty water bottle so I wouldent be tempted to fill it later:

Eagle Peak is the big one in the middle and Flute is just to the left of it in the back.

The weather was fickle, it was warm, but snowing horizontal.. and blue sky all around. I was just climbing into a big dark grey cloud. oh well.. Also snow conditions had changed dramatically since the weekend when Billy's crew was here, the lower snow much softer, and up higher fresh snow had totally filled in their steps. No poaching for me.

made it down supppper fast, world class 2,000' vert glissade included. Lots more snow eating and a king size snickers later it was back to summertime.

oh, and finally saw this bear molesting the garbage can as I was driving away. he was cute.

This time lapse was shot using a tiny goPro helmet cam, the cameras are sweet, the company hooked me up with some for packrafting film projects. They have a still shooting mode with an intervelometer function. It is by far the lightest and most idoit proof helmet cam, and also time lapse photography, setup there is:

Untitled from Eric Parsons on Vimeo.
Posted by Eric at 1:38 AM 1 comment: 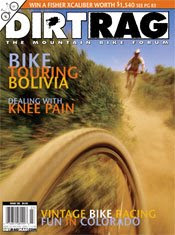 I knew they were running the article, but the freakin cover story? wow! that was a suprise..

can't wait to see the print version and see what photos they used.

I can't play the flute

Simple plan - solo time in the mountains, Try to climb Flute Peak.
Going into the South Fork Valley is a bit like going home, so many great days have been had back there, close to town, big mountains, long approaches.
Flute was the goal, but there are pleanty of other options if I didnt feel up to it.
rope, rap gear, bivy gear, stove, ice axes, megamid & not enough food all packed hit the Harp Trail at around 6pm monday night.

Spring tundra skiing at its finest, took the boards off about 20 times:

Took 3 hours just to get to Eagle lake, I was demoralized and tired.. but the lake looked good so I kept going in the cool wind and fading light, nice and fast across the lake, then more rotten slogging up the valley finally broke a skin track up ave debris to finally get to the first step at midnight. Stumled around tired in the dark, heavy pack took it out of me. then I lost my spoon in the snow and had to use a piton:

up at 5, nice and cold out, good crust. out of the mid before 6.. snap, WTF? I look down and my ski pole broke in half. Black Diamond crap, I sware their stuff is getting cheaper and cheaper, not too peppy. sluggish. skin skin, up up, Finally on the Flute glacier, up the right side, slow, steady. snow is good, pack heavy, damn rope... but no reason to turn around yet. to the base of the Couloir, the bergschrund is nicely filled in with ave debris. Out comes the probe.. one pole skinning.. probing to find the cravasse... no sign of it, must have already passed it... too steep to skin, time to boot. A bit soft, maybe its just on the bottom fan, up and up, humm ok, a little better, crampons on, up and up 45 degrees, not so bad, but a bit punchy, 50ish degrees. Is it going to slide and take me out? no its fine, no slab, the lower layer is re-frozen crust, its cold and 8am, stop worrying. higher, wow, this is going to go... topout - windslab? cornice? its cool, just steep, suck it up and finsih it.. top.

where too now, crampons staying on, some rock scrambling, "this isnt soo bad..." then finally the view I've seen photos of:

It dosent look too bad, but what is not visable is the 100+' death fall down to the right. Took a long brake here and gave it some serious thought...


after 2 "looks" I grabbed my pack and made it across the exposed traverse to the top of the small ice patch in the middle, from there the route cuts left and after another long time thinking, no Thanks, too exposed. I don't feel like vomiting or dying today. I will come back with a friend. oh well, 50' from the top is pretty damn good, and I gave my rope a nice long walk...

Down down down..
at the bottom of the couloir with some morning light:

The couloir cuts up the right side of the peak:

humm, its still before noon, must keep moving. Calliope. it has turned me back twice, there is no reason not to go for it, you're here scoped a route up the back side, the normal routes are on other faces, but this looked like it would work.

deep snow, kick kick, hot sun, kick kick, long way up... nice neve on the upper half, on to the ridge... sweet.. Cool summit, required a bit of poking around to find. The hours of kicking steps starting to catch up to me:

Down down, crampons, then booting, then snowboard turns...Back to the bivy and fired up the stove for re-hydration, I was going to spend another night but I ate all my cheezwiz and ho-ho's and my bivy was in the shade, so out it was, beginning the long march back to civilization:

looking back at Eagle Peak:

back to the truck at 10pm brain damaged with one Gu left.
Its good to be back in the groove.
Posted by Eric at 12:31 PM 3 comments:

Bryce and I were listening to the Chemical Brothers driving home, it just seemed to flow well... the video camera didnt come out (or come at all) on the more technical stuff so this is mostly about the turns!