11 days in the wilderness.. how do you sum it up and put it into words? I always have a problem with it and every effort falls short. This will be no exception since my brain is mush and has been in a stream of conscious mode since I've been back.

We had nothing short of a fantastic trip. The weather cooperated, the route was excellent with good riding and a host of challenges, our group was solid and could crack dirty jokes 27 hrs a day. But leaving it at that would not make for much of a story. Details! photos! right?! ok fine. twist my arm.

I've been thinking about this and the best way I can describe how this trip came about is "Circular Inspiration". Roman did bad ass trips in the 90's that blew the doors off the notion of wilderness mountain biking as we know it. Following in the footsteps, Dylan and I were amped on the concept and started packrafting with our bikes a few years ago. Eventually We spent 19 days riding, pushing and paddling our Pugsleys on the northern section of the Lost Coast from Yakutat to Cordova, a route brought to light by Erin and Hig who walked it. At some point a now older and wiser Roman saw the new bikes and the potential... bought one this spring and proposed doing the Southern part - Yakutat south. um yes, Game on! Friends from Colorado, Steve Fassbinder and Mike Curiak, both well versed in the world beyond 2.25" joined in. It was quite the crew, well rounded (literally for some) and experienced.

Expedition Coastal fat tire biking is a unique animal. It's gear intensive with Bikes and packrafts, yet simple and primal. When things click it makes for a very efficient method of travel without the mundane of simply walking. Yet there's more too it than that. You'll have try it for your self, but for me it has something to do with real adventure riding. The giddy feeling of riding where nobody has biked (or even thought of it!) in a remote environment with the self reliance and determination that comes with it. There I tried.

(The photos in this post are a mix of mine and some of DOom's)
Off to Yakutat, landing there and prepping our bikes brought on total deja-vu of 3 years earlier. Same bikes, same flight, same bacon cheeseburger from the lodge. 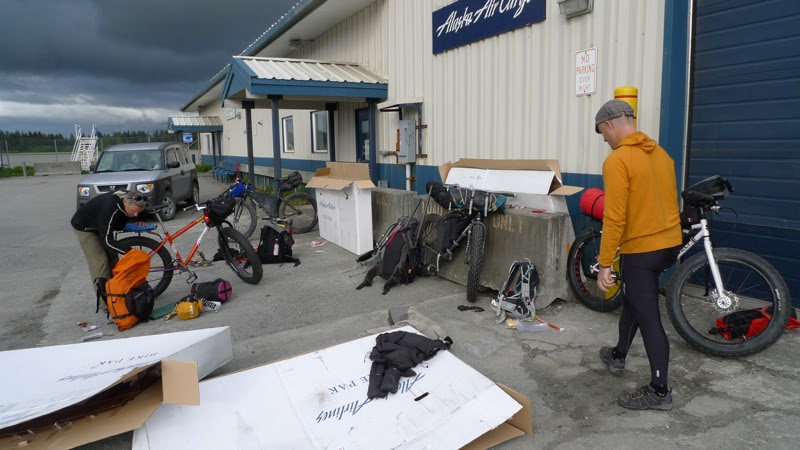 Heading out to the beach: 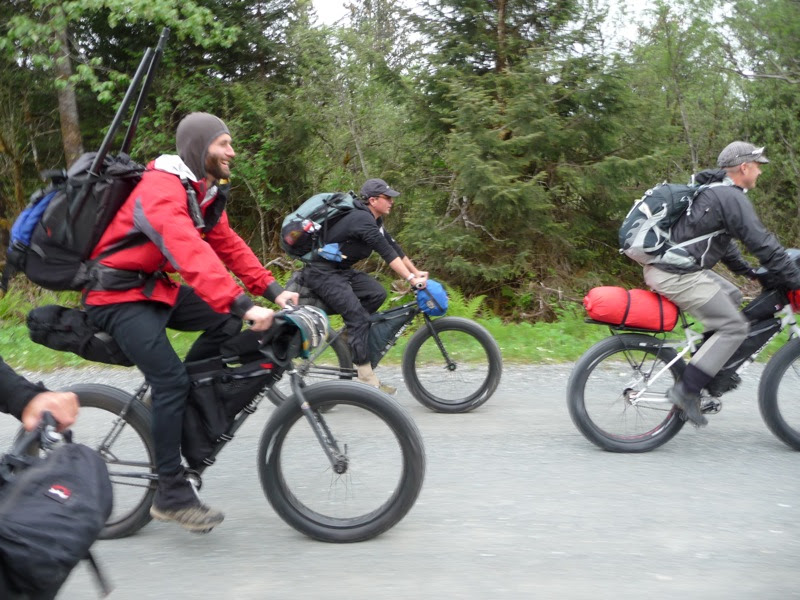 We had the perfect night, a low tide that made for a fat tire playground. Gigapixels were burned finally on the beach. 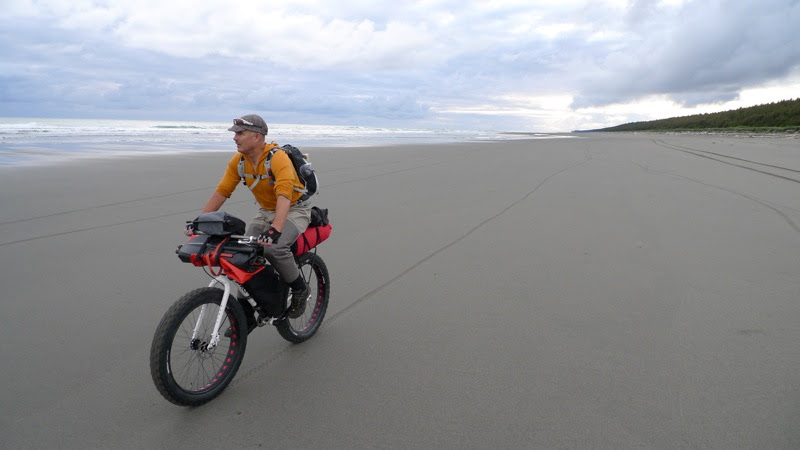 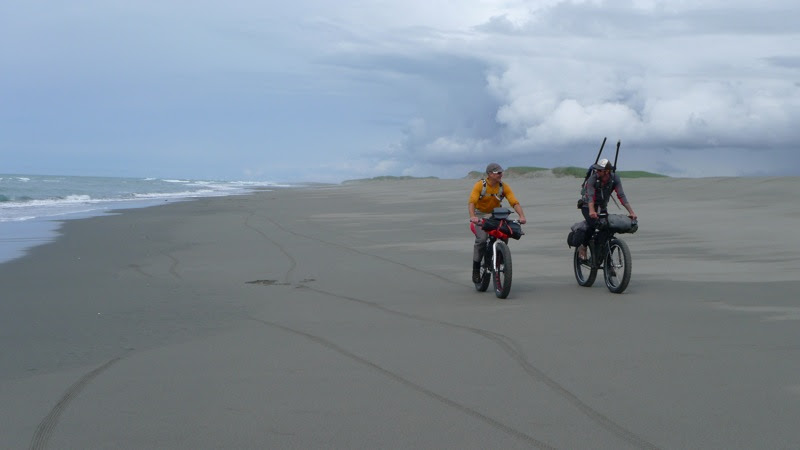 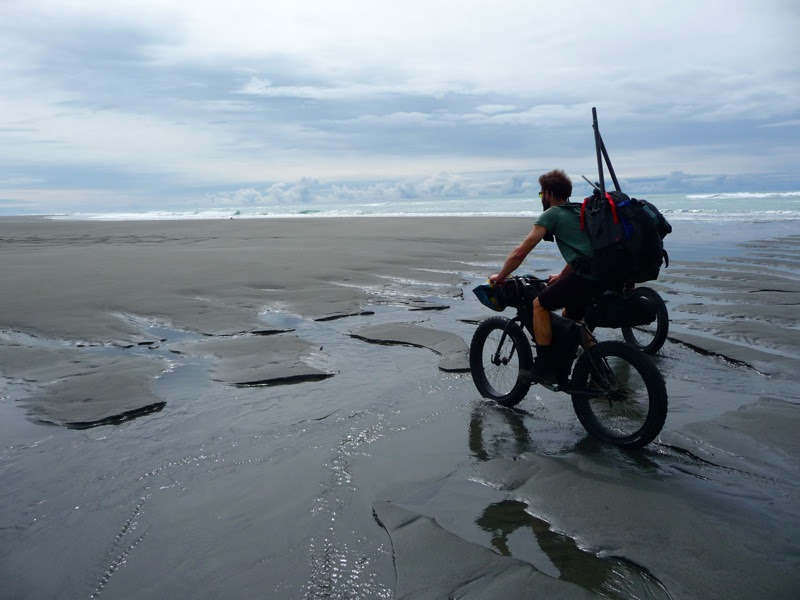 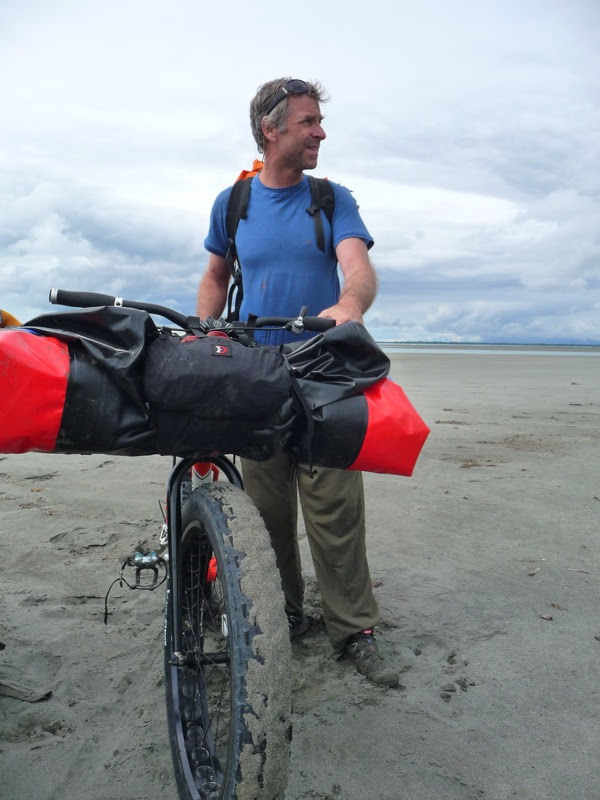 a funny thing happens when everyone is spinning nearly the same gear combo... 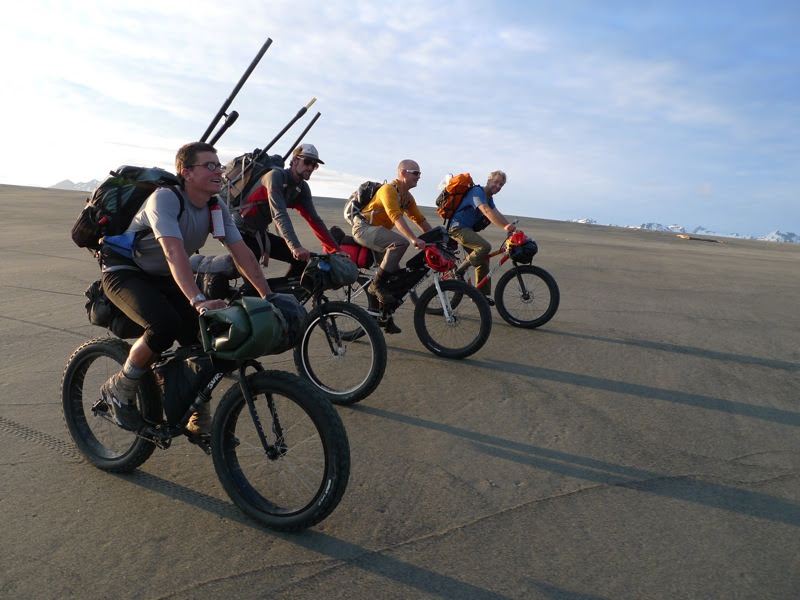 We enjoyed near perfect beach for the first 2 days. Crossed Situk Lagoon, The Dangerous River and finally the Alsek as we worked our way closer to the Fairweather range. 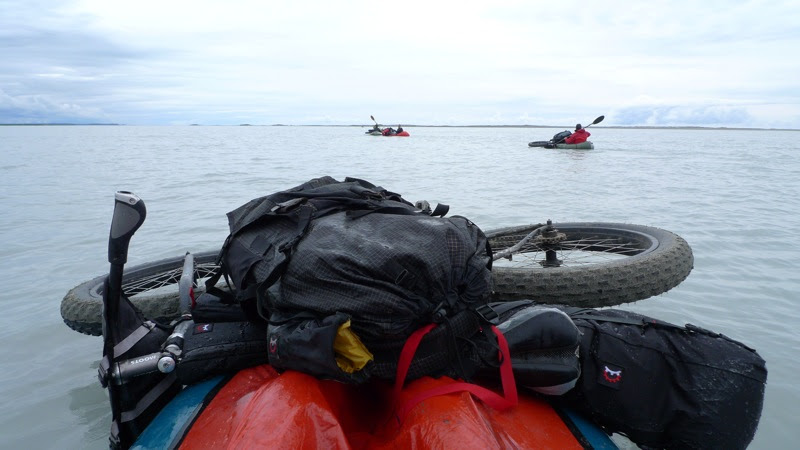 We spent the whole trip traversing below all these peaks. 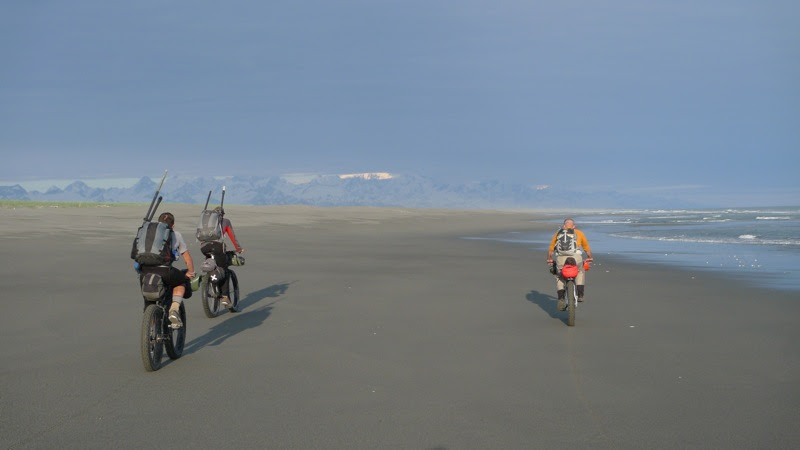 Immense mountains smack in front of us, crashing surf off to the right. Is this really happening or am I dreaming? if so don't pinch me.. 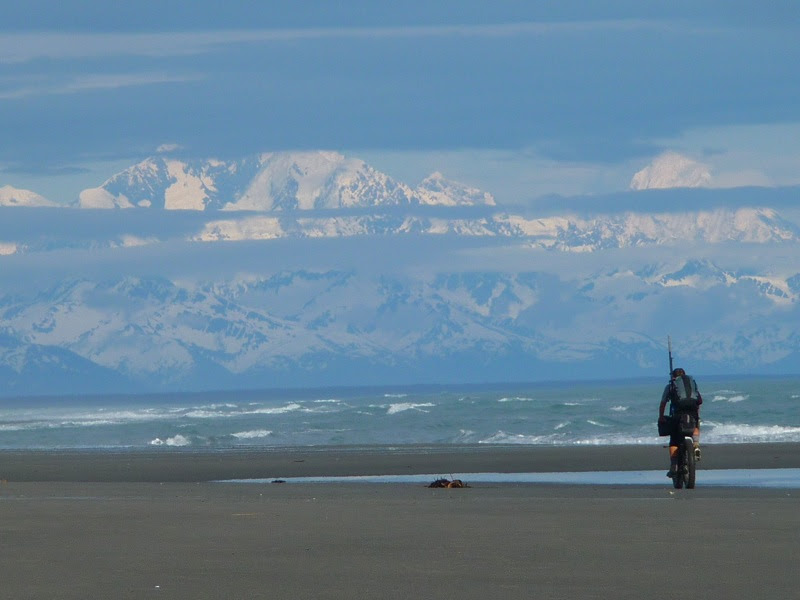 At the end of the third day we hit Boulders. Boulders on the beach mean big glaciers are close by. Following bear trails we went up into the woods and schwacked to the lagoon formed by the Grand Plateau Glacier. (note clawage) 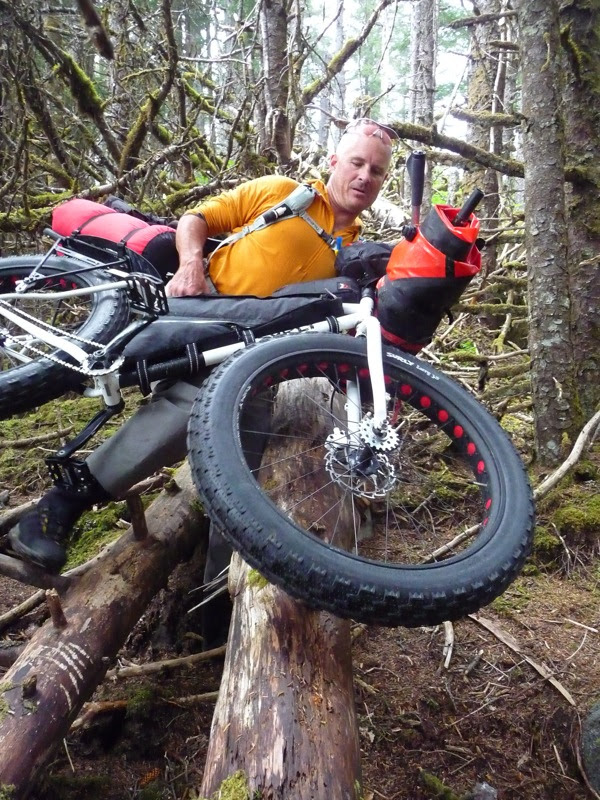 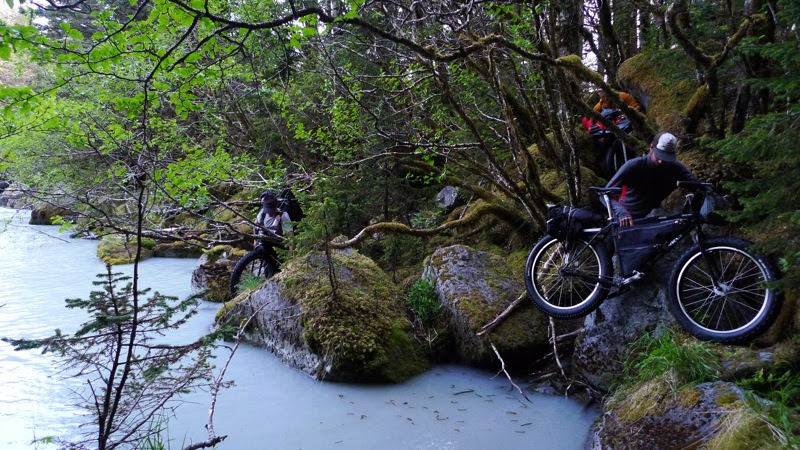 We reached the lagoon as the evening's chill was upon us, combined with icebergs and glacier melt made for a brisk paddle in search of a camp spot. 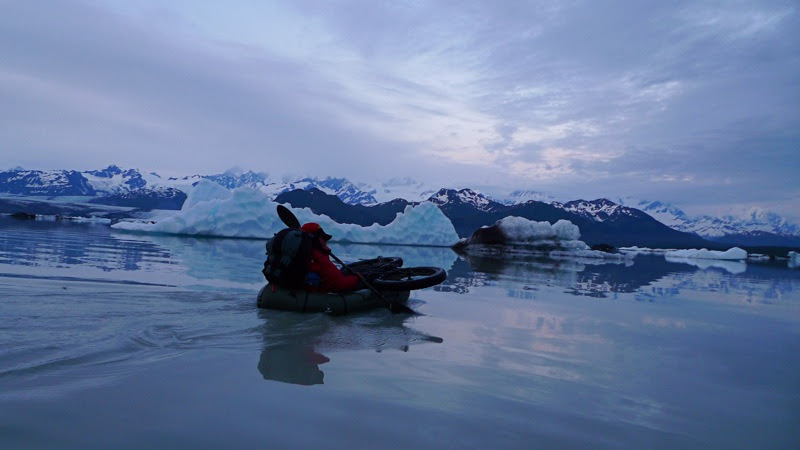 We found one, a tiny stretch of beach between the alders and rocks. 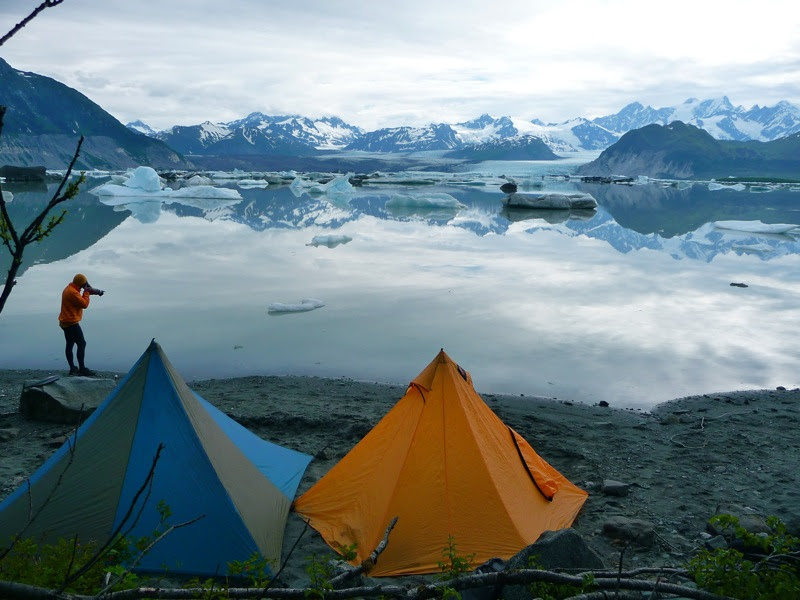 Tall tales by the campfire accompanied sporadic glacier calving off in the distance and we hoped that the lake level would not rise from the mini tsunamis and swamp our camp.

Putting in the next day, everyone giddy for good reason! 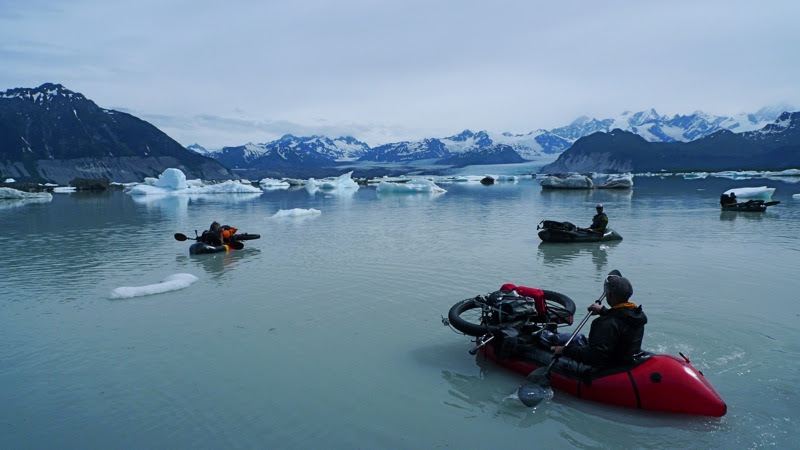 Our exit from the lake was a bit of a crap shoot. Our maps (last updated decades ago) showed a braided stream leaving on the far end of the lake. Our plan was to follow that back down to the beach. We did, but the stream was not really there anymore. The landscape had changed dramatically and we climbed up away from the lake in full on schwackfest swamp mode. 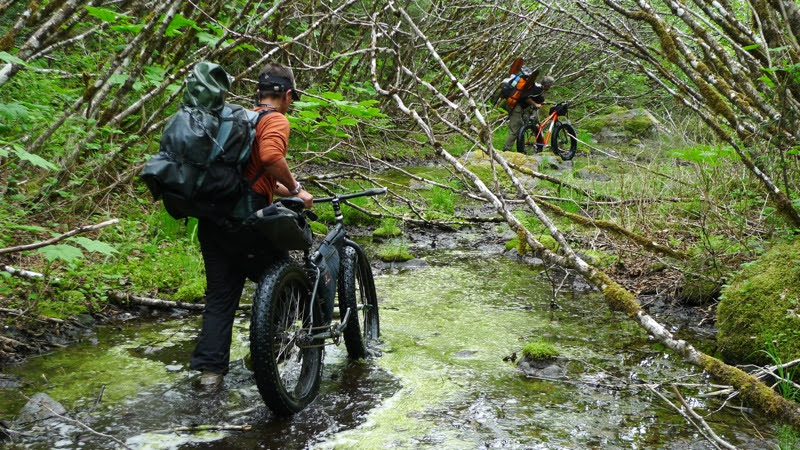 We found the stream, but it was just slime covered boulders, balls deep at times. 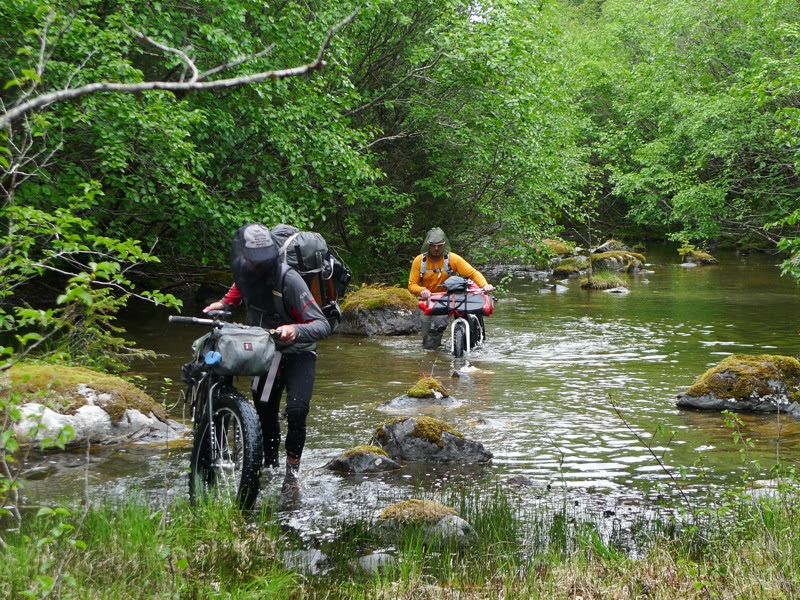 Off the stream and into the quality. Mike gets acquainted with Devils Club and all that summer Alaska trip have to offer. A few hours later we broke out onto the coast. The massive boulders were gone and we were greeted to smooth and ridable beach. This would be the theme for days to come. Bash and bushwack in the morning, cruise in the evening. 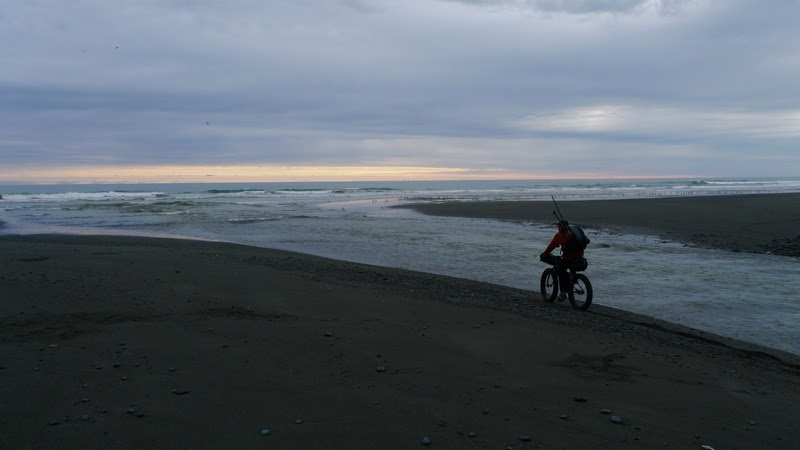 Cape Fairweather - Subdivision sized boulders loomed ahead. I figured a solid 4 hrs to get around it all. It took us about 6 or so reminiscent of the Sitaki Bluffs along the Malispina Glacier. It was here that Roman educated us on the aptly suitable verb "Stumblefucking" nothing describes it better. Roman obviously derived the term from decades of perfecting the art. You bash along with your bike in mind numbing tedium. Thought process slows, as does time. Your body tires from the minute yet strenuous movements needed to carry, push and bash though the cobbles and boulders. The only thought that need to be held on to is that yes, the bike will be useful again at some point so keep bashing, you're having fun you idoit. 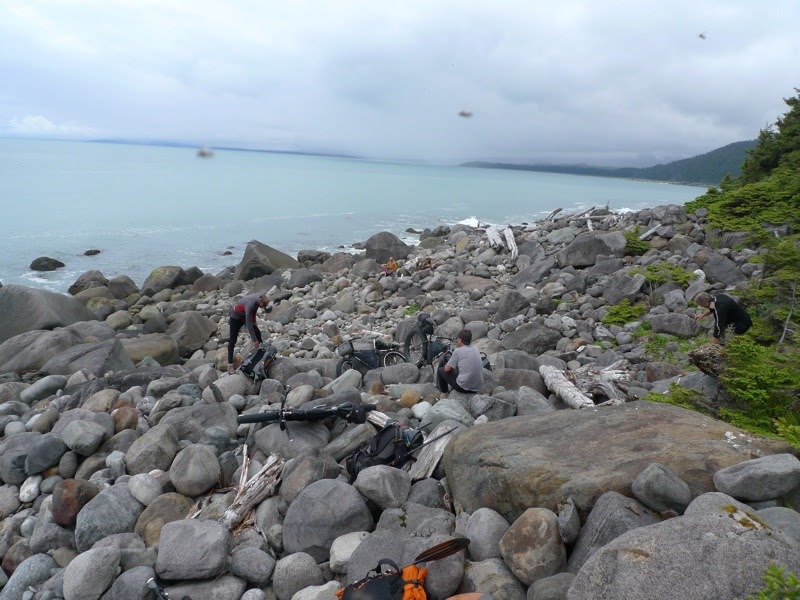 Bear trails, not the best maintained in these parts. good times! 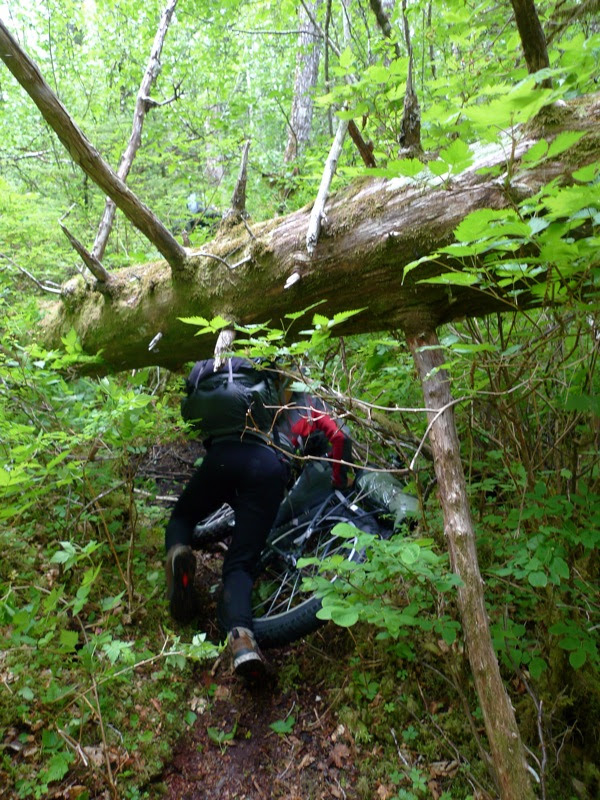 they grow em big out here. 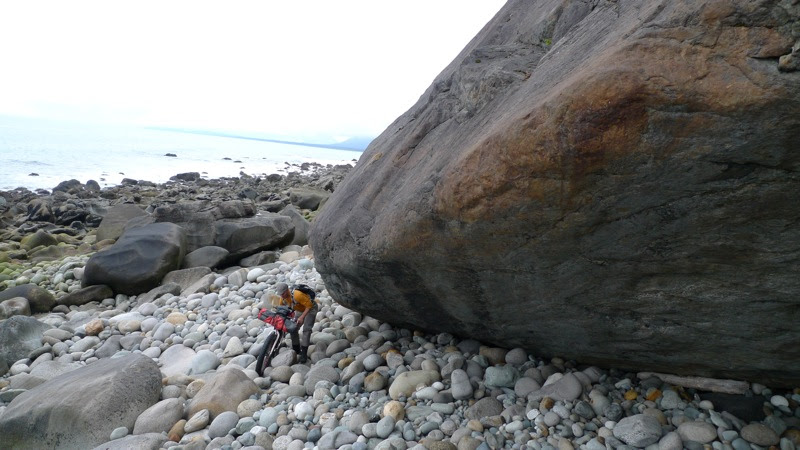 As evening progressed we left the boulders behind and were quickly greeted to the goods. re-pack, pedals on. I was in no hurry this night however. After a solid day of stumblefucking the big trees, big beach and big ocean brought a sense of calm. an erie calm in a way, something that made me think that this moment right here and then, is what I came for.

wow, wow, wow.
A new level of cool for packrafts.
Plus a brilliant new word for me: stumblefucking!

Maybe a stupid question but why is this water so cloudy?
http://www.revelatedesigns.com/layouts/revelate/files/blog/Yak-Gus/P1020546.jpg